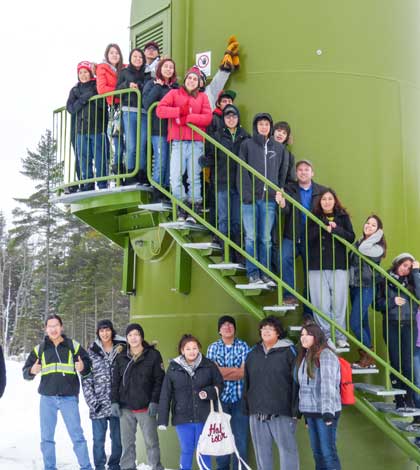 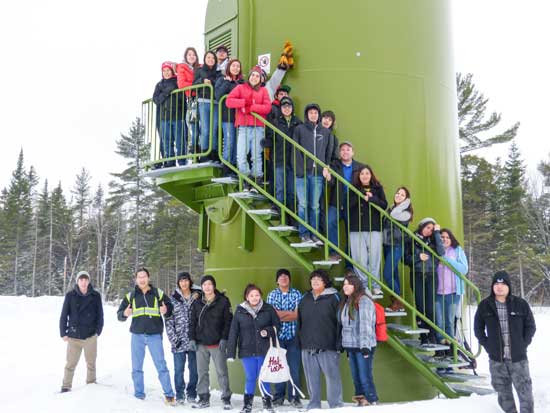 EDITOR’S NOTE: Following a field trip to the Mother Earth Renewable Energy project wind farm in M’Chigeeng and a Kaboni Road oil well, the students of Andrew Moggy’s Grade 9 Wasse Abin geography class felt moved to write about their experience. The joint class effort can be read below.

WIKWEMIKONG—Students from Wasse Abin Wikwemikong High School were given a firsthand look at green energy and First Nations business savvy in M’Chigeeng when they were given a guided tour of the 4MW wind farm by the Mother Earth Renewable Energy (MERE) Project Director Grant Taibossigai.

Mr. Taibossigai explained to the visiting students and their teachers that the MERE project is the first wind farm totally owned by a First Nations community and that it will be a valuable source of power and income for the community in the years to come.

“This is the result of more than 10 years of planning and work,” Mr. Taibossigai explained. “We had to work with the surrounding townships, the government and come together as a community for this to happen.” After their initial shock over the size of the turbines and the speed at which the blades were spinning, the students were treated to a look inside the turbines themselves as Mr. Taibossigai explained their inner workings and how the onboard computer manages the turbines.

Students in Andrew Moggy’s Grade 9 geography class were curious about the wind turbine’s power output and where it went and Mr. Taibossigai explained that even though the two turbines could probably supply enough power for all of M’Chigeeng, the energy is sold to Hydro One and put back into the power grid to be used by all the communities in the surrounding area.

The hands-on learning continued back in Wikwemikong as students were given another tour of the current oil well capping on Kaboni Road as workers explained the process they used to “abandon” a well. Engineers explained that some of the wells drilled in Wikwemikong date back to the mid-late 1800s and that over time they can sometimes allow oil to seep to the surface. The site that students were able to see had been seeping oil in the past but had been cleared of obstructions, re-cut and sealed with a special cement. Students of Amanda Fry’s environmental sciences class asked about the possible environmental impact of the site and how much, and how extensive the oil seepage was, curious if it represented a danger to the community. Engineers explained that seepage was likely minimal (as the site probably only held about three barrels total), but soil samples of the surrounding area were being taken so they would know how much of the soil would have to be removed and treated.

After returning back to Wasse Abin Wikwemikong High School, students were asked what they learned about green energy and the impacts on the environment. One student remarked, “We’ve got to be looking forward and thinking about the future of the community and how our actions are going to affect future generations living here”.

Another student noted, “Wikwemikong doesn’t have a really tall bluff like M’Chigeeng for a wind farm, but we’re got lots of rooftops that we’re installing solar panels on, so I think we’re moving in the same direction as they are.” While there was some debate on which method was best for Wikwemikong, all the students agreed that seeing First Nations address the future and the environment in person is much better than reading about it in the news. 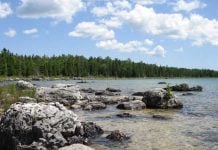