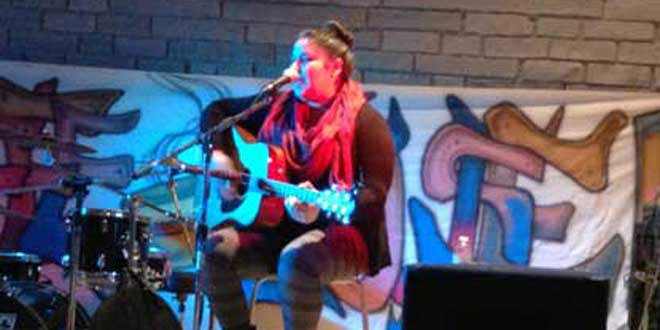 Ms. Valerie O’Leary, the art teacher, told the large crowd that gathered at the Coffee Houses’s stage area that this was the school’s opportunity to showcase just some of the talent- drama, visual arts, dance, music- that is prominent within the Wikwemikong High School student population (and beyond as she called up her father, retired teacher Henry Hoy to perform a celtic ballad in honour of the upcoming Robbie Burns Day and also her husband Patrick O’Leary who serenaded her and the audience too).

The hallway leading to the stage area was transformed into an art gallery to show off students’ work in a variety of media and styles.

The live entertainment went on for an impressive three hours and featured talent from the school population and from the community at large.

Moira Shawanda, a grade 12 arts student who sings with great emotion, told the Expositor that it is her plan to study music in college and to make this her career. In fact, she enjoys the art program so much that she has enrolled in the second semester art class as well.

Jason Peltier, who quipped that the last time he was in a high school was in 1996, took to the podium with his guitar and sang two ballads, one of which he said he’d written with with his cousin Brian.

Moira noted that she had had the opportunity to sing with Brian’s band last summer, “and it was great!”, so generational cultural cross pollination is in full bloom at Wikwemikong.

The audience thanked act after act for their work with loud applause, and there was a wide variety to applaud: duelling grass dancers, a variety of monologues, community member Everett Morrisson rendering three songs in the operatic bass voice in which he is classically trained (the final number was an Elvis standard) and newly minted master of ceremonies Adrian Trudeau did a fine job in setting up Mr. Morrisson’s act, introducing him as someone who had sung for Oprah!

The evening was a great success and folks stayed and stayed. The students and staff deserve much credit for this major undertaking.