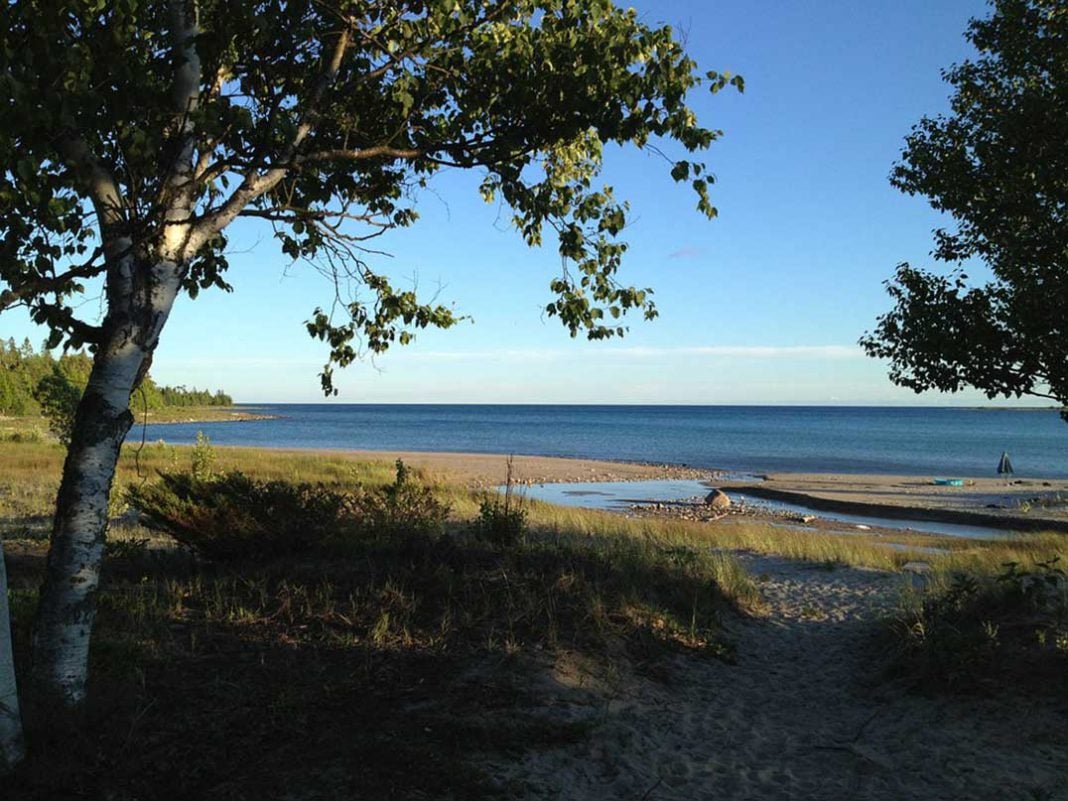 MANITOULIN—The Expositor was contacted by Therese Trainor, an Island environmentalist who is very active with local stewardship programs, expressing concern over the potential impact of the use of a water range used to train combat pilots from nations all over the world.

“We have had people in Providence Bay with cracked toilets as a result of the shaking that comes from the bombing,” said Ms. Trainor, referencing allegations contained in a July 8, 2015 Expositor article ‘Prov Bay tremors attributed to US live-fire exercises near Alpena, Mich.’ “It occurred to us that the US Navy bombing the lake and shaking our bedrock is extremely dangerous for Line 5…and nobody has connected those dots! Jim (Nies) and I are drafting something for the Enbridge board, Harjit Singh and FLOW and Oil for Water to raise the flag. We know the Navy will say we are nowhere near there, but a month ago a friend was shaken off her butt over at Evansville! That is getting too close for comfort.”

Public Affairs Officer 1st Lt. Andrew Layton of the Michigan Air National Guard did express puzzlement when asked about the potential impact of the bombing range on the Line 5 pipeline across the Straits of Mackinaw. “What I know offhand is that the ‘Water Range’ used by US military aircraft during events like exercise Northern Strike is a restricted airspace about 40 miles offshore from Alpena in Lake Huron, so it is quite a distance from Mackinaw,” he said. “I’m not that familiar with plans for the Line 5 project, but from what I understand, I don’t think it would come anywhere close to this area of Lake Huron.”

The city of Alpena is located nearly 100 miles south of the Straits of Mackinaw, with the Water Range located a further 40 miles roughly to the east.

1st Lt. Layton said that the water range has been in use by the US military since the World War II era, adding that the Water Range continues to be  important to ensuring the readiness of US military units and coalition partners to operate in maritime environments.

“Although there are several other water ranges in the country, the Lake Huron water range is part of the largest military training airspace east of the Mississippi River,” he said. “In total, the water range is approximately 20 by 50 miles in area.”

Enbridge public relations officer Ryan Duffy also expressed some confusion over the concerns. “The line is not any where near Alpena (where the range is located) and it has never been an issue in 65 years,” he said. “That line has been there for a very long time and this is literally the first time anyone has brought this up.”

Although the specifics of the Line 5 area were not at his fingertips, 1st Lt. Layton noted that there are significant efforts made to ensure both environmental and public safety in using the range. “We work closely with the US NOAA (National Oceanic and Atmospheric Administration) to ensure compliance with their no-pollution policy,” he said. “The targets used at the range are retrieved and recycled, while any remaining particles are collected after training events with nets. Through our partnership with NOAA, they have received several grants that have contributed to expanded maritime research, including a study of the area to ensure historic shipwreck sites are not disturbed by the water range activities.”

1st Lt. Layton apologized for not alerting Manitoulin residents of when the range is in use. “We normally send out notices to our different communities that might be effected,” he said. “We have put your paper (The Expositor) on the list so you should be getting updates going forward.”

Mr. Duffy said that Enbridge’s current focus is on the recent agreement with the State of Michigan to replace the pipeline running on the seabed in the Straits of Mackinaw with a 10-foot wide tunnel. “We are pretty excited about that,” he said.

“That tunnel will run about 100 feet below the lakebed and will be encased in a foot of concrete,” said Mr. Duffy. “There will be a new 30-inch line in the tunnel and that will greatly enhance the safety of the line, removing any problems with anchor strikes or spill issues into the water.”

The tunnel will ensure there is little disruption to the environment of the lakebed as it runs so far below, suggested Mr. Duffy. The plans currently call for the tunnel project to be in place sometime within the next seven to 10 years. “Maybe sooner if the permitting process moves faster,” he said. The permitting process involves both regulations at the state and federal levels.

The activists fighting against the Line 5 project object to the project on the question of safety, noting the recent agreement between the state and Enbridge to build the tunnel means that the line will continue to operate for at least the next seven to 10 years. They also point out that the line will enhance our dependency on fossil fuels at a time when the world faces a crisis of pre-biblical proportions—with the potential to rival the greatest mass extinctions in the earth’s history. Although their mission to stop the line may seem quixotic at this point, nothing could be further from the truth they maintain.

“Contrary to what Enbridge and (Michigan) Governor Snyder want us to think, the Line 5 Oil Tunnel Agreement is not a done deal,” notes FLOW president Jim Olsen. “Enbridge’s official statement acknowledges that this is merely a commitment to explore the replacement of the Straits section of Line 5 with a tunnel under the lakebed that could contain a new pipeline. This dangerous deal authorizes continued operation of Enbridge’s dual 65-year-old oil pipelines for at least seven to 10 years in the open waters of the Great Lakes during construction of a proposed tunnel,” continues Mr. Olsen. “The governor is shirking his primary legal duty under public trust and modern environmental laws to protect the Great Lakes. Instead, the governor is attempting to shoehorn a tunnel under our Great Lakes by using the 1950 Mackinac Bridge Authority statute. This is not the common-sense solution as Governor Snyder claims. It defies common sense. Michigan continues to bare all the risk while Enbridge reaps the lion-share of the benefits.”

The tunnel project will cost between $350 and $500 million, said Mr. Duffy. “No taxpayer dollars are involved in any of this,” he added. Although Mr. Duffy was not certain if the tunnel construction would involve Canadian labour or services, he noted that the current ongoing project to replace the portion of Line 5 that crosses the St. Clair River near Sarnia would. That project involves drilling a hole beneath the riverbed and then pulling a pipeline through to the other side.

The activists on the American side have taken their fight to the ballot box, urging voters to make Line 5 an issue in the coming November mid-term elections. The stakes they say are high.

“Every day 23 million gallons of oil are pumped under the Great Lakes through Line 5, risking 450 miles of shoreline and 100,000 acres of water,” claims a beforethespill.com website referenced by Ms. Trainor. “Water that supplies drinking water to 40 million people daily. Water that provides crucial habitat for a dozen endangered species. Water that supports five multi-billion dollar industries.”