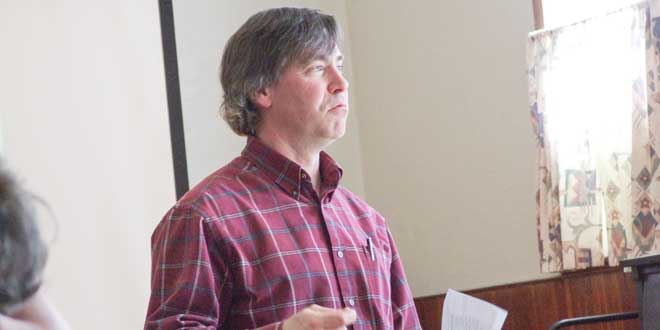 LITTLE CURRENT—The Dairy Farmers of Ontario Manitoulin West Sudbury Dairy Producers annual general meeting took place on March 7 at the Little Current United Church hall. Representatives of the nine dairy quota holders of the region, dairy farmers mostly, gathered at a nice roast beef luncheon to learn about development in their industry, honour those of their compatriots who have received awards of recognition for 2014 and to network with each other.

Manitoulin West Sudbury Dairy Producers president Keith Emiry opened the luncheon meeting with grace before the assembly sat down to eat and discuss lighter subjects of friends and family before weighing into the heavier issues of concern facing the dairy industry.

Following the meal, Ministry of Agriculture and Food Agricultural Development Advisor Brian Bell delivered a presentation on the Rural Agri-Innovation Network and the drainage subsidy program being delivered by the Ministry of Northern Development and Mines, Northern Ontario Heritage Fund.

“This is not an Agriculture and Food program,” explained Mr. Bell, but he delivered information on the project.

Under the program, which has a $300,000 maximum grant cap, new producers can access funding of $500 an acre for tile drainage and $500 an acre for land clearing. Existing producers can access the fund as well, but the funding would be 50 percent grant and 50 percent loan. For those Mennonite farmers who do not accept government grants, the program can be accessed on a loan-only basis, Mr. Bell explained. “Just write across the bottom of the form ‘loan only’ before sending it in.”

Dairy educator Leigh Swinimer gave a short presentation of her work in the schools this year. She noted that getting bookings from teachers has proven a little challenging. “I sent out a lot of information in October and November, but I did not get a lot of feedback,” she said. “I even emailed messages to the teachers directly. I still did not get a lot of feedback.” Ms. Swinimer finally settled on going to meet the teachers directly one-on-one and that is proving to be more fruitful.

Promotional work by the Manitoulin West Sudbury Milk Producers committee was somewhat limited last year. The committee’s promotional efforts were largely accomplished through booths at hockey tournaments and Island Skate and the milk producers are getting involved with an Island bi-athlete. “She made the Ontario team,” said the secretary. “We put $250 toward her expenses. We might want to consider a logo.”

Alex Anstice of Tehkummah, suggested that the Canada Cup bike races may be a good venue to explore as well. “There are 500 racers there,” he said, noting that it would be an ideal event for the ‘Recharge Milk’ promotion, where volunteers hand out chocolate milk to racers at the finish line as a recharge drink. “It’s nice for us to get involved in some new events.”

The committee also donated funds to local food banks. Split between the Massey and Manitoulin food banks, the funds supplied 27 families with milk for three months.

General agreement on the concept saw the budget adjusted to allow funds to be set aside to provide information meetings for the membership.

DFO Field Service representative Jean-Guy Seguin presented awards to a number of local producers, including a 2013 Certificate of Merit to Jim and Alex Anstice of Oshadenah Holsteins “In recognition of maintaining Grade A farm premises and shipping milk of above average quality.”

DFO Region 12 director Steve Runnalls delivered a presentation on the impact of the provisions of the Trans-Pacific Partnership and the Comprehensive Economic and Trade Agreement (CETA) agreements with the European Union. Mr. Runnalls noted that government information on the deals was largely political during representations with the ministry. “It is their deal and they just sold it,” he said. “We get a different story with each email that comes in.” Information at this point is very contradictory. “(On the TPP) we get a lot of conflicting stories,” he said. “One Conservative MP told us it was at least five years out,” he said. “Then he came to a reception that night and told us it was a done deal.”

As to the still developing Pacific trade agreement, the deal is more difficult to reach due to the larger number of players. Mr. Runnalls noted that key concerns are greater access for Canadian products in other markets, including tariff reductions. “In trade, success is measured in gaining access to other markets and protecting your own,” he said. “New Zealand, the US and Australia all want greater access.” 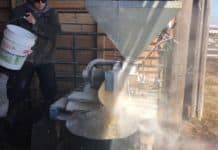 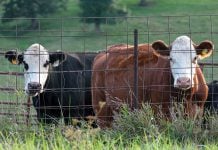