‘Kchi-Nendizan’ premieres this Saturday as part of festival

TORONTO—Spoken word artist and actress Lena Recollet of Wiikwemkoong will see her film ‘Kchi-Nendizan’ premier this Saturday, October 21 at the imagineNATIVE Film and Media Arts Festival in Toronto.

Kchi-Nendizan, meaning ‘big pride’ in Anishnaabemowin, is Ms. Recollet’s first poem fully in her language. The film features Ms. Recollet performing the poem and was codirected with Miles Turner. The project is part of the ‘Fest Step’ short film program at imagineNATIVE.

“I am really inspired by the rhythm and words of my people and I wanted to use the language to create a piece about being proud of our culture, heritage and language,” shared Ms. Recollet. “The poem starts off about starting the fire—igniting the passion and being inspired by the language. It talks about the rhythm and the bounce of it, fighting for it and carrying it forward for future generations.”

Ms. Recollet said that her mom is an Anishnaabemowin language teacher and that she went for her for guidance on the poem.

“Creating the poem inspired me to learn the language more in depth, but a lot of the words have dual meaning so I spoke to her when I got blocked—she was really supportive and a big help. My Auntie Lillian has passed on now, but my mom went to her for some of the words. The one word I wanted to use for ‘bounce’ actually had a different meaning in Wiky—people use it to mean ‘someone who walks bowlegged’ instead of ‘walks with a bounce’—so she was able to help me find the right word.”

Mr. Recollet’s process for writing the ‘Kchi-Nendizan’ was also different than other poems she has written.

Ms. Recollet and Mr. Turner have worked on creative projects in the past, she explained.

“I know Mile’s style and I knew I could leave it in his hands and it would work with the poem and what I pictured,” said Ms. Recollet.

Ms. Recollet has been a part of imagineNATIVE in different ways throughout the years, most  notably several years ago when she performed with Buffy Saint-Marie after completing a mentorship with the iconic Canadian singer-songwriter.

The 18th imagineNATIVE Film and Media Arts Festival will be held in Toronto from October 18 to 22 with over 100 feature films, documentaries, shorts and music videos created by Indigenous filmmakers. This year, 72 percent of the films presented at imagineNATIVE were made by Indigenous female directors. 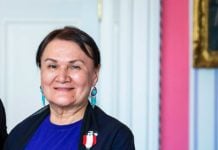