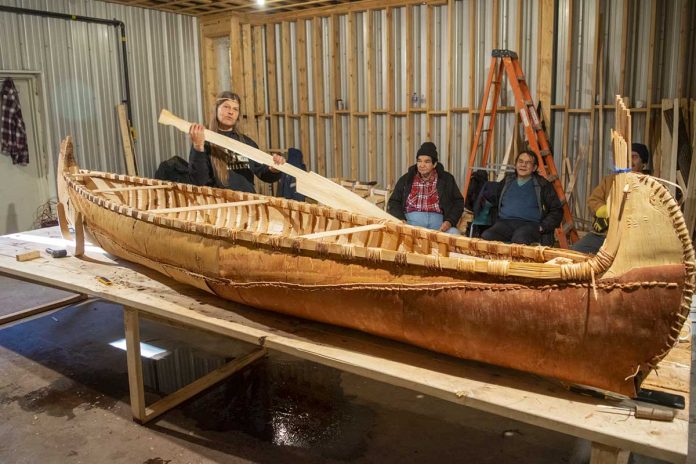 MANITOWANING – The community of Wiikwemkoong has for the first time made use of band members Linda Mathews, Alphonse Trudeau and Wayne Bayer, birchbark-canoe-making experts who have run workshops for other communities and organizations such as Kenjgewin Teg, for its own three-week build in partnership with Debajehmujig Storytellers, a project that concluded in late November.

“All I got to say is it’s about time,” said Blackwolf Bark Canoes’ Ms. Mathews with a laugh. “We’ve wanted to do something for Wiikwemkoong for a long time.”

This is Blackwolf’s first birchbark canoe build since the Kenjgewin Teg project this past July, as featured in the August 7 edition of The Expositor. The construction of this 16-foot craft was organized by Wiikwemkoong Tourism.

“We got funding through the Ontario Arts Council’s Indigenous Art Fund in 2017 and this is one of the projects we had in our proposal. It took some time to get it off the ground and see who was interested in participating,” said Naomi Mishibinijima, tourism arts development officer with Wiikwemkoong Tourism.

The build took shape in collaboration with Ontario Works, Debaj, Wikwemikong Heritage Organization (WHO), FirsTel and the Wikwemikong Development Commission. Debaj offered a perfect workspace for the project—it is accessible, has an indoor workshop, outdoor working space and a substantial kitchen and dining room to accommodate those working on the project into the evening.

“We worked the timing so anybody could join, especially youth. We wanted as many participants as possible which is why we structured the time so it went into the evening, so we provided dinner for everyone,” said Ms. Mishibinijima.

Twenty-five young students from Shawanosowe School in Whitefish River First Nation as well as a group of 45 from Sagamok made trips to Manitowaning to help with the project and become e’wiigwaas jiimantegik (canoe builders). Ms. Mishibinijima said both schools now have aspirations to build a birchbark canoe in their own communities.

She added that just because Wiikwemkoong Tourism organized the build, it does not mean the watercraft will remain in their exclusive possession.

“This is a community build. It belongs to the community and they will have access to it,” said Ms. Mishibinijima, adding that the design of the craft came from participant input. “It’s not meant to be hanging up on display in somebody’s office, it’s meant to be utilized.”

Although the build is now complete, the launch is being saved for a warmer day in the coming year, projected to take place around May. A fitting time, said Ms. Mishibinijima, as the spring symbolizes the rebuilding and revitalization of life, just as this ancient tradition is being revived.

“I’m really happy with how everything has gone. We had no injuries,” she said. “The group itself was cohesive, everybody got along and everybody participated.”

“The whole premise of the (Indigenous Art) Fund is the preservation and transfer of Indigenous knowledge. It was exciting to see them take it upon themselves to apply and share that knowledge,” said Ms. Mishibinijima. FirsTel recorded video for much of the process to create a short documentary teaching aid for future e’wiigwaas jiimantegik.

The build began with a pipe ceremony to ensure the project would advance in a good way. Ms. Mishibinijima said the same elder would likely return for the spring launch ceremony.

E’wiigwaas jiimanteg (canoe builder) Mark Eshkawkogan gave The Expositor an overview of the construction and the order in which the canoe was assembled. He spoke first in the Ojibwe language and later translated his messages into English, emphasizing another key element of the project.

“Anishinaabemowin was the cornerstone of this program. There is three different dialects in the room,” said Ms. Mishibinijima. “They’re learning language application skills. These individuals are providing a legacy for the community.”

Mr. Eshkawkogan described how two days were spent making rope from splitting and soaking spruce root. The base of the watercraft is made of thin sheathing and the ribs and gunnels are made of cedar that has been heated in water and moulded to the desired shape. The cross beams are made of ash, though birch or other hardwoods can be used.

Once all of the internal supports are in place and the birch bark is securely tied to the frame, pine gum is used to seal the seams and a mix of bear fat and charcoal forms the final sealant mixture.

Debaj visual-artist-in-residence and e’wiigwaas jiimanteg Ray Fox will etch designs on the sides of the canoe that are made of red winter bark. One side features Mishipeshu, the great water spirit, and Mr. Fox said he used the depiction at the Agawa Rock pictographs on Lake Superior as a model.

“On the other side, we’ll have our four teachers: a bird, the land, a fish and a plant. The plant will be elongated and feature seven flowers which represent the seven values or Seven Grandfather Teachings, and it uses Woodland Anishinaabe floral design,” said Mr. Fox.

The finished canoe took many hundreds of hours to complete over its three- week duration, split among the dozens of e’wiigwaas jiimanteg who helped on parts of the construction.