WIIKWEMKOONG – A partnership between the Wiikwemkoong Board of Education (WBE) and non-profit Innovations for Learning Canada (IFL) is helping young students develop literacy skills despite school closures through a system pioneered by Wiikwemkoong citizen Jacob Pitawanakwat, who works for the non-profit.

“It’s been such a joy to work with the WBE and see how families are reacting and working with Jacob. It’s been a real pleasure, we have such a spirit of collaboration and creativity,” says Fabrice Grover, executive director for IFL Canada.

IFL pairs employees within corporations with young learners who are at risk of having below-average literacy skills.

Studies have linked lower incomes to poorer literacy and future disadvantages. Median income in many First Nations is far lower than surrounding areas, such as 2016 census data which shows median income in Wiikwemkoong is roughly $8,000 to $10,000 lower than Manitoulin District, a pattern repeated at other reserves.

Numerous complicating factors on reserves can also lead to lower education levels. Thirty-two percent of Wiikwemkoong residents in the 2016 census had no certificate, diploma or degree, compared to only 24 percent in Manitoulin District.

“It’s not fair to allow these kids to fall through the cracks just because they didn’t come from the same privilege that others came from,” says Mr. Grover.

A study on early-age literacy levels shows Grade 3 is a pivotal year. If a student falls behind their classmates by then, they are 350 percent more likely to drop out before completing high school.

However, literacy levels at the Kindergarten and Grade 1 levels are much more equal among students. It is a crucial time to act so less-advantaged students can keep pace with their peers, says Mr. Grover.

IFL’s two solutions to this problem are TeacherMate and TutorMate, both digital tools that foster literacy in at-risk students between Kindergarten and Grade 2.

TeacherMate is an in-school solution that uses an early literacy interventionist (ELI) to conduct five-minute one-on-one sessions with the young students. It offers a daily reinforcement of key classroom concepts.

TutorMate is a related program that uses employees from large corporations as volunteer mentors. The organizations sponsor IFL and each participating employee, pending a background check, takes 30 minutes per week to virtually meet with a student, read stories, provide a personal connection and encourage their development.

Of the kids who start working with an ELI in Kindergarten, 80 percent catch up to the expected reading level by the end of Grade 1, compared to 52 percent without any support.

Those numbers convinced WBE systems principal Mick Staruck and education director Fay Zoccole to consider the program for their Junior School. They met Mr. Grover at a Toronto education conference in 2018; he had ‘crashed’ the event because he was working with Innovations for Learning in New York and wanted to launch a branch in his home of Canada.

He and the board representatives formed a strong connection and soon made WBE the first school board partner for the Canadian launch.

“A lot of times when people come into First Nations, you can tell right away they’re more worried about how (an opportunity) will benefit them. From start to finish (with IFL) it’s always been about how to help the kids, not pushing a product,” says Mr. Staruck.

He adds that Mr. Grover has adapted his organization to Wiikwemkoong’s needs.

The program had been going strong for two years when the pandemic took hold in March. Since IFL’s offerings are designed for classroom integration and rely on technology access, keeping the program running was a daunting task.

The young Wiikwemkoong citizen has worked for IFL Canada as an early literacy interventionist since it launched in his community. He had been supply teaching in the WBE and heard about the upcoming IFL partnership through his mother, a literacy coach at the board.

He also studies computer science at Laurentian University and was immediately tasked with finding a way to run the program from students’ homes.

Using remote desktop software designed for IT support, Mr. Pitawanakwat can deliver the interactive programs while maintaining voice communications and the ability to see the child’s screen and offer instant feedback—all while using low internet bandwidth.

“My hat is off to Wiiky for allowing us to go through with this; they’ve been so responsive and open with the process even though it was very experimental in the early stages,” says Mr. Pitawanakwat.

Wiikwemkoong also has the advantage of being well-prepared for technology supported learning, having already built up a 1:1 ratio of laptops to students and being familiar with digital learning tools.

Now, students connect through a parent’s phone for their daily five-minute TeacherMate session and weekly half-hour story with the TutorMate volunteer. This also lets the ELI give feedback and advice to parents to continue the momentum between sessions.

The re-worked program developed in Wiikwemkoong has worked so well that it is now a template for schools across North America to boost literacy during the pandemic.

“We now have a hedge against uncertainty; we knew we could run this in the classroom but if we get a second wave, we have a solution that will let our ELIs still work from home, and now we can involve parents. There’s lots of potential,” says Mr. Grover.

WBE is the only school board in Canada that has kept TutorMate and TeacherMate running despite COVID-19. The school board has also extended the program into the summer to combat the ‘summer slide,’ a decline in literacy skills over the holidays that disproportionally affects disadvantaged children.

“He’s somebody that’s right here in our community. The kids know him, the parents know him and I think that’s why it’s working so well,” she says.

Mr. Staruck gives kudos to the innovative spirit of Wiikwemkoong as a whole and agrees that this service will help close education gaps.

Paula Recollet has a Kindergarten-aged daughter who is using the virtual program and says she sees her daughter’s confidence rising as she grows more engaged with reading.

“I feel grateful, thankful that they’re taking the time out of their day to volunteer and help with their phonics,” she says. “I can’t thank them enough for helping keep our kids engaged and connected during these trying times.”

Mr. Pitawanakwat, too, finds the process rewarding, especially through the relationship with the children and the joys when they grasp a concept.

Innovations for Leaning Canada seeks to partner with businesses to expand its tutoring impact. Information about the program can be found at InnovationsForLearning.org/canada. 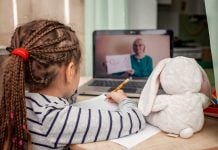 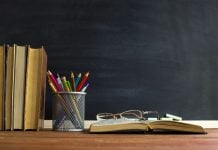