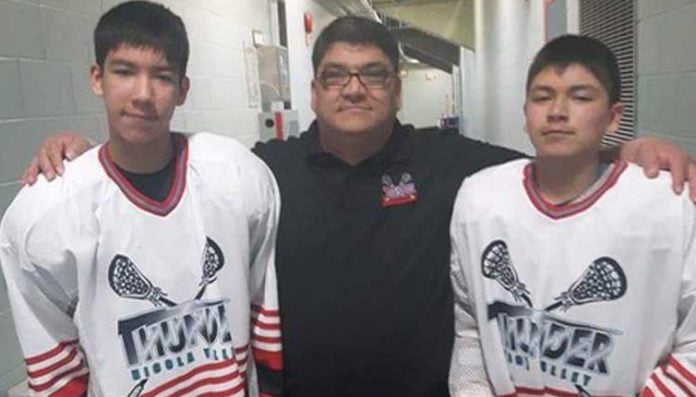 MERRITT, BC—Fifteen-year-old Clinton Kaboni, a Wiikwemkoong band member, received word last week that he would be playing field lacrosse at a prestigious California high school a mere four years after he first began to play the game.

Clinton told The Expositor that he didn’t start playing lacrosse until he and his family—dad Wayne and brother Connor, 14—first moved to BC four years ago. He noted that their first summer spent in BC was a lonely one for him and Connor so the brothers picked up lacrosse sticks and began to practice the sport, perfect their throws and catches.

“This kid in my class told me I should play lacrosse,” he said. “He told me to sign up for the club team in Merritt.” And so he did.

Over the summer, Clinton played at the North American Indigenous Games for Team BC and he even attended the Denver University Showcase, which was where the coach from Sierra Canyon School spotted him play.

“The coach called my dad and started talking to him,” Clinton said.

Clinton isn’t just a star at lacrosse, he’s a hockey player (he’s a Little NHLer), filmmaker and entrepreneur too.

Last month Clinton attended LA Skinsfest (a Native American film festival), taking home the 2017 Achievement in Student Filmmaking Award for his short film ‘Because I’ve Been There.’ Clinton was the film’s editor while Connor was in charge of camera and sound.

The brothers also have DahBroz, a line of inspirational clothing for youth, with the goal to inspire other kids that anything is possible. It’s a clothing company focussed on promoting positive thinking.

While in Los Angeles for the film festival, the Kabonis took a tour of the Sierra Canyon School, located in Chatsworth, California—a suburb of LA found just north of Malibu.

“It’s pretty impressive that 100 percent of the students who have graduated from there have gone on to four-year universities,” Clinton said. Sierra Canyon School has won the State finals for lacrosse on more than one occasion and has the claim to fame of having the No. 1 ranked high school basketball team in the United States.

While the offer came just last week, he’s expected to show up for school in January, next week, in fact.

“I’m not that nervous about moving away,” he said. “I think I’ll be just fine.”

The school is working to find him a billet family.

Next year, Connor is hoping to join him there.

“My dad seems to be taking it okay,” he added.

Clinton said he hasn’t been back to Manitoulin for two summers, but wishes his Wiikwemkoong family a Merry Christmas and Happy New Year.