The vision for the recovery centre was kept alive by the determination of a group of community members, noted Rainbow Lodge Executive Director Rolanda Manitowabi during her remarks, singling out for special recognition Doris Wassegijig-Kennedy.

Newly installed Wiikwemkoong Ogimaa-kwe Rachel Manitowabi shared a bit about herself, whose spirit name translates to “Woman who brings change.” During her remarks Ogimaa-kwe Manitowabi’s father, former Wiikwemkoong chief Eugene Manitowabi, was sitting in the audience.

“The seed for this building was planted in the 90s,” she said, noting the resilience and strength that nurtured and sustained that vision to its fruition.

Elders Richard (Animkii-Ankwad) Assinewai and Mary Ellen Kitchikake delivered prayers for the opening ceremonies. Mr. Assinewai spoke of the four spirit ceremonies that were conducted for the building, including the first before the start of construction, a second smaller one during COVID, one when the building was completed and a final on the day of the grand opening.

Ms. Kitchikake spoke of the healing jingle dress she created and the meanings behind the vision and sewing of the regalia. “It’s a healing dress and a healing dance,” she said. “I am still finding myself.” She noted that it took her four years before she finally began fulfilling the vision that came to her through a dream. “When she went to Fabricland to buy the material, she came upon the very fabric which she had seen in her dream.”

The morning began at 6 am with a sunrise ceremony, followed by a breakfast for the participants. The official grand opening ceremonies began at 9:30 am with Master of Ceremonies Kerry Assiniwe officiating.

Throughout the grand opening, the Seven Grandfathers were invoked by many of the day’s speakers, which included former Ogimaa Duke Peltier who cited the challenges of the past and the ongoing need for recreational activities and community events to strengthen the community. Healing for the community will require employment opportunities as well, he noted.

Chiefs of Ontario Grand Chief Glen Hare shared his own 32 years of sobriety and spoke of the need for all levels of government and communities to come together to combat the scourge of addictions. He noted that COVID provided a wakeup call to everyone, but also brought everyone together.

ISC program manager Tasha Thorton brought congratulations to the community on behalf of the ministry and noted that this was her first visit to Manitoulin. “I will be back with my family to enjoy it more,” she said. The 20-bed residential treatment building was made possible through a $6.8 million contribution.

Algoma-Manitoulin MPP Mike Mantha provided some personal reflections and the important role that listening plays in his role as an elected official and the revelations that came to him during a cedar bath ceremony. Mr. Mantha brought greetings on behalf of his federal colleague, Carol Hughes, who was attending an NDP caucus meeting in Halifax and unable to attend.

“I would have dearly loved to be able to be there,” Ms. Hughes said when she was contacted by The Expositor following the grand opening.

Diane Jacko brought greetings on behalf of the Wiikwemkoong Health Centre and spoke of the important role language, culture and traditions play in melding traditional healing practices with those of western medicine. “Love is the core of all teachings,” she said.

Ngwaagan Gamig Recovery Centre president Richard Lathwell concluded the remarks, noting “We are opening a door, many of the people who walk through this door will heal.”

Seven trees were planted by the seven officials who originally broke the ground for the facility and following that ceremony, they were each presented with a very limited edition print of a James Mishibinijima painting of the Seven Grandfathers.

Following the official remarks and addresses a feast was held and tours of the facility conducted, before a final round dance and giveaway and closing remarks. 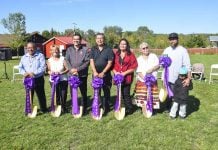 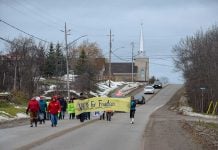 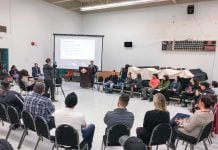 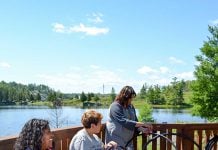