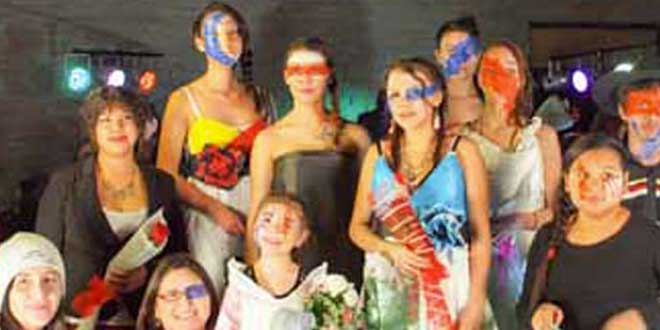 “We kicked off the show with beaded wallets in the shape of tacos,” explained Fashion and Creative Expression teacher Valerie O’Leary. “They each designed and made their own with different beaded patterns from geometric designs to more traditional patterns. They turned out great!”

Following the wallets, the models showed off designer mukluks with rabbit fur and beadwork.

Next were dresses and skirts, based on a project where the students had to follow either a dress or skirt pattern and cut and sew a garment from scratch.

“One of the favourite assignments the students had that was featured in the fashion show was their altered items,” continued Ms. O’Leary. “We went to secondhand stores and the students bought items that they altered and/or embellished. It’s a really fun project and all the pieces were very creative.”

The grand finalé of the show was the Cashmere-brand toilet paper dresses, which Ms. O’Leary said were a “big hit” with the audience.

The evening ended with a family dance for all the designers, models, volunteers, family and community members.

There were eight designers in total who had pieces in the fashion show, along with six senior and two junior models.

Backstage help for the designers was provided by Wikwemikong fashion designer Bruno Henry, who has been a supporter of the program since its inception in addition to Josh Peltier, who did the make up design.

“The show went really well and it would not have been possible without the help and support of staff, family, peers and community members,” concluded Ms. O’Leary. 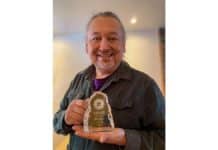