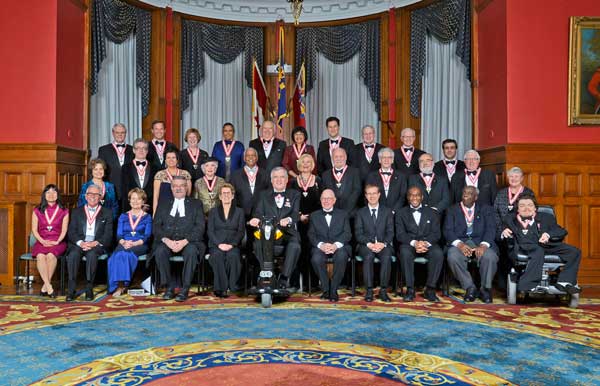 OTTAWA—Allison Fisher of Wikwemikong was one of 25 appointees named to the Order of Ontario by the Honourable David C. Onley, Lieutenant Governor of Ontario, last Friday in a ceremony held at Queen’s Park.

Ms. Fisher is the executive director of Ottawa’s Wabano Centre for Aboriginal Health, a state-of-the-art facility serving more than 10,000 aboriginal people every year and widely regarded as the premier aboriginal health centre in the country.

Wikwemikong Chief Duke Peltier told The Expositor on Monday that he and the Wikwemikong community were proud of Ms. Fisher’s achievement.

“Her dedication to the people brings rewards to the community of Wikwemikong as she continues to be an ambassador for us,” said Chief Peltier. “Her values were instilled in her from a young age by her parents Donnie and Rosemary Fisher. Her mother was one of the individuals who brought back the Wikwemikong powwow, which was the first one revitalized in eastern Ontario.”

“She turned a struggling centre into a dynamic operation,” commented Chief Madahbee in a press release. “I congratulate her on receiving this recognition.”

“The new Wabano centre, which was opened in May 2013, provides a wide range of social services, health supports, and youth programs for 35,000 aboriginal people living in the Ottawa region. In its 14-year history, Wabano has had dramatic success in creating programs that reduce homelessness, poverty, unemployment, addiction rates and family violence among aboriginal people,” the release goes on to note.

Created in 1986, the Order of Ontario is the province’s highest official honour, recognizing the highest level of individual excellence and achievement in any field. Nominations are made by members of the public, and any resident or former long-term resident of Ontario can be nominated. The deadline for nominations is March 16, 2014. For more information visit www.citizenship.gov.on.ca.

See next week’s Expositor for an interview with Ms. Fisher.