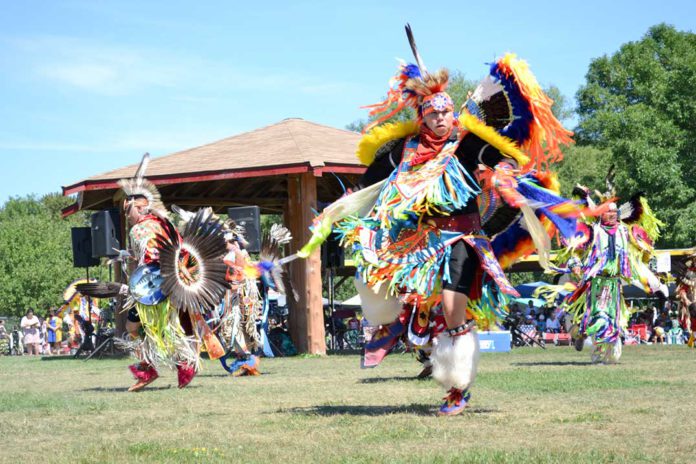 WIKWEMIKONG—It was a busy weekend at the 56th annual Wikwemikong Cultural Festival, with visitors from near and far attending to see the amazing dancing, music and art the festival offered.

The master of ceremonies this year was Allan Manitowabi and Ryan McMahon, while Wesley Cleland took on the role of arena director. The smoke dance singer was Jordan Smith of Tuscarara, New York. The head drum judge was Gary Parker of Tonawanda Seneca, New York, while the head dance judge was Elizabeth Webkamigad of Wikwemikong. The head veteran this year was Robert Eshkibok of Wikwemikong.

Special guests this year were the Wushu Project from Toronto performing the Lion Dance. The Lion Dance has been part of the Chinese culture for hundreds of years and was performed on special occasions such as weddings, store openings, festivals and celebrations. The lion, a symbol of power, wisdom and good fortune, brings happiness, longevity and good luck. In addition, the dance has now become a national level sport.

In addition  to the great dancing, amazing regalia and food, there was an art show, craft vendors and workshops. Many of the workshops focused on heritage and culture and included regalia and dance, the Seven Grandfather teachings, and a history of the Ojibwe language.