This will be the second doctorate for Dr. Lavell-Harvard, an alumnus of Queen’s University and the University of Western Ontario. Dr. Lavell-Harvard has dedicated the academic part of her career to the study of education, including the experiences of indigenous women in Canadian secondary and post-secondary school systems.

“It is a great honour to be acknowledged and recognized by Nipissing University,” said Dr. Lavell-Harvard. “Equal access to education for indigenous peoples is such an important part of our struggle for equality in Canadian society.”

Dr. Lavell-Harvard noted that, as honoured as she was personally with the award, she was even more pleased with that the focus of the work that she has championed throughout her career, that of indigenous women’s’ rights, has been recognized through the honour—particularly from such a well respected institution as Nipissing University.

“They are doing so much work to support aboriginal students in their endeavours,” she said, noting that the accolade helps to recognize “so much of the work we do in the area of human rights.”

Dr. Lavell-Harvard also gave a shout out to the many grandmothers and aunties who have been instrumental in moving forward the rights of indigenous women around the globe.

“We wouldn’t be able to be here without the grandmothers and aunties,” she said.

Dr. Lavell-Harvard was elected president of the Native Women’s Association of Canada at the 41st Annual General Assembly in 2015, after serving as president of the Ontario Native Women’s Association since 2003. Dr. Lavell-Harvard’s accomplishments include being named a member of the Independent Advisory Board on Senate Appointments, being Canada’s first indigenous Trudeau scholar and publishing a number of articles and books discussing aboriginal mothering practices and the effects of colonization and governmental oppression on aboriginal mothers.

Dr. Lavell-Harvard’s mother, Debaj elder in residence Jeanette Corbiere-Lavell, will be receiving her own honourary doctorate from York University in a June 21 ceremony.

The Native Women’s Association of Canada (NWAC) is founded on the collective goal to enhance, promote, and foster the social, economic, cultural and political well-being of First Nations and Métis women within First Nation, Métis and Canadian societies. As a national organization representing indigenous women since 1974, NWAC’s mandate is to achieve equality for all Indigenous women and girls in Canada. 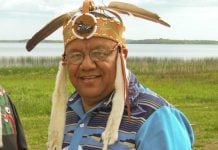