Kelly Babstock shows what Canadian hockey players are made of

STAMFORD, CONNECTICUT— Wikwemikong band member Kelly Babstock is having a phenomenal inaugural season with the National Women’s Hockey League (NWHL) and her team the Connecticut Whale, which is currently undefeated 4 and 0.

“It has been really good,” said Ms. Babstock of her season thus far with the new NWHL. “We have a talented group of women in the league and it is making for some good competition and great hockey.”

Ms. Babstock signed her contract with the Connecticut Whale in August and was excited to have been selected to play in the first professionally paid women’s hockey league.

The NWHL was established earlier this year, with the league comprised of four teams: the Buffalo Beauts, Boston Pride, New York Riveters and Connecticut Whale. The teams will compete throughout the hockey season starting this fall, on the road to the league’s championship and trophy, the Isobel Cup, named after the daughter of the donator of the Stanley Cup, Lady Isobel Gathorne-Hardy, who herself was one of the first known women to play hockey.

In the league’s first game, the Whale faced off against the Riveters to a full arena at Chelsea Piers in Connecticut.

Ms. Babstock netted one of the three goals that brought the Whale their first win.

In their last game, the Whale battled the Beauts with the Whale looking to keep their undefeated title and the Beauts for their first win.

Ms. Babstock shone in the second period, ripping a shot to the right corner of the net and scoring her team the first point of the game.

Teamwork and strong puck handling skills scored the Whale two more points, but it was a close game with the Whale beating the Beauts 3-2.

The NWHL has been getting a lot of positive attention and is growing a large fan base, with the New England Sports Network (NESN) recently announcing that it will air eight of the Boston Pride games for the remainder of the 2015-2016.

The league has also announced an inaugural NWHL All-Star Weekend to be held at Buffalo’s Harbor Center on January 23 to 24.

Beauts’ Emily Pfalzer and Pride’s Hilary Knight were selected as captains and will choose 11 of the total 14 players from their fellow NWHL players, while the fans will vote the remaining players on each team through social media.

“The league has been getting a lot of great support,” said Ms. Babstock. “It’s great hockey and the season has been going really well.” 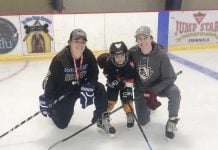 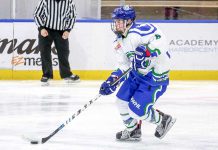 Hockey player with Island roots shines in US college hockey