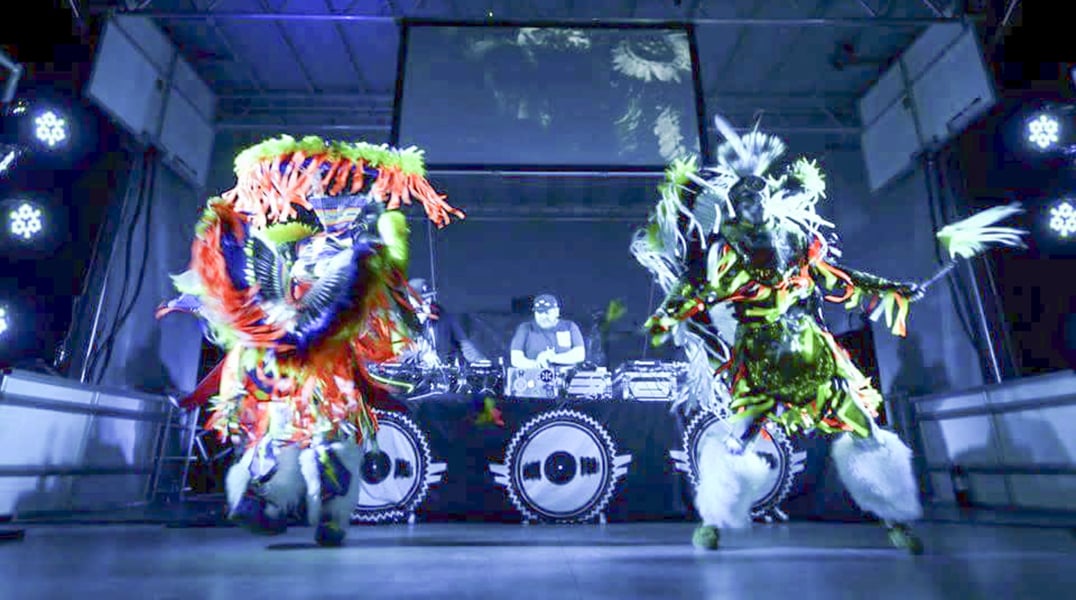 The conference kicked off Tuesday morning with opening remarks and an honour song from Young Biisineh.

The first speaker was Wikwemikong’s Chris Pheasant speaking on ‘Empowering Our Spirit.’ Other speakers included Ngwaagan Eshkibok on ‘Understanding the Language’ and famed actor and motivational speaker Wab Kinew.

Mr. Kinew is most known for his roles hosting CBC’s ‘The Eighth Fire’ and ‘Fault Lines.’ He is originally from Onigaming First Nation located in Northwestern Ontario and is an aboriginal leader and advocate for First Nations people.

Day two of the conference featured a workshop on endangered species from Theodore Flamand, traditions and drum teachings from Harvey Bell and Adam Kaboni, cedar bath teachings from June Manitowabi and rites of passage from Dr. Edna Manitowabi.

Ms. Manitowabi was assisted in her workshop by fellow Kina Gbezhgomi workers. Following smudging and a water song, Ms. Manitowabi spoke of the different types of cedar baths.

“Cedar can be grown throughout the year and used for protection and for cleansing,” said Ms. Manitowabi. “You can also use cedar water if you are having troubles with yourself. There are three types of cedar baths: grieving and loss, it is a gentle bath given to individuals who are dealing with grief and we softly brush the person’s hair and talk about letting their loved one go; sexual abuse, we normally do these baths at the South Bay Lodge away from the community and they are peaceful and calming; and the final type is death and dying, in which we prepare the loved one to move on to the spirit world.”

Wednesday’s workshops and speakers concluded with a presentation from Cree actor Bronson Pellieter.

Mr. Pellieter is famous for his role as Jared in the Twilight Saga, but was also featured in the recent movie ‘Fishing Naked.’

“This is my first time on Manitoulin and in Wikwemikong,” Mr. Pellieter told The Expositor. “It is very beautiful—quite the change from California where I live.”

Mr. Pellieter explained that he grew up in Vancouver, but lived in Toronto for a brief time when he was 17.

“When I was 14, my best friend encouraged me to tag along to an audition,” he said of how he got his acting start. “I ended up getting the part and was the host of a children’s TV show called ‘Art Zone’.”

After getting the acting bug, he landed his first television series role as Jack Sinclair in Renegadepress.com before gaining international recognition for his role in the Twilight Saga.

“My advice for youth is to not be afraid to follow their dreams,” shared the 28-year-old actor. “If you have dreams, you can reach them. Anything is possible.”

Mr. Pellieter is from the Askinootow First Nation in Alberta. He said that he went to an all Native American school and was a youth ambassador for his aboriginal community.

The final day of the conference started with Gerry Kaboni who spoke of traditional teachings and also brought highly anticipated special musical guests A Tribe Called Red, who not only gave a motivation speech, but also a community concert in the evening.

They have been called the face of an urban Native youth renaissance and champion their heritage and speak out on aboriginal issues. The group brought with them powwow dancers, but also invited community dancers to be highlighted on their stage.

Over 200 youth registered for the three-day conference and took in a variety of workshops. Organizers commented on how pleased they were at the turnout and the great community support of the event.