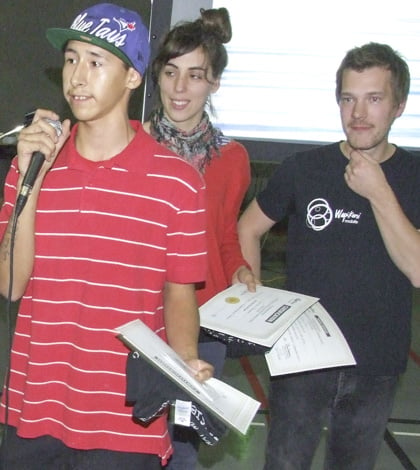 WIKWEMIKONG—There is a wealth of talent just beneath the surface in Wikwemikong and that talent came bubbling to the fore on October 30 at Wasse Abin High School as Wapikoni Mobile hosted a special screening of a selection of works created by more than 40 Wikwemikong youth utilizing the mobile sound and screen studio’s equipment during its sojourn in that community.

Wapikoni Mobile youth agent Mattieu Buzzetti-Melancon and his compatriots on the project, Sophie Guérin and Sandrine Brodeur-Desrosiers, were effusive in their praise of the project participants and the reception and assistance they received from the moment they arrived in Wikwemikong.

“When we arrived in Wiky a month ago, we came in this big, weird-looking trailer,” said Mr. Buzzetti-Melancon. “It was hard to explain to people what we were all about. Tonight, the participants will show you. We were really impressed with the talent you have here in Wiky.”

Mr. Buzzetti-Melancon explained that this was the first time the Wapikoni Mobile crew had worked in a community outside Quebec, but the response was almost immediate.

“We are a toolbox,” he explained, emphasizing that “what you will see here tonight is the participants’ intentions. What he/she wants to explore.”

As part of  Wapkoni Mobile’s mission, the crew also presented three films produced in the other more than 26 communities in which they have also been active.

Chief Duke Peltier thanked the crew for their work with the youth in Wikwemikong and for “showing what is possible.” The chief expressed the community’s pride in the work accomplished by its youth and said that “these films will be shown around the world.”

In fact, the works created in Wikwemikong will soon (within the next month) be uploaded to the organization’s website and the original works of film, song and spoken word recordings will be readily accessible for viewing and listening. Mr. Buzzetti-Melancon stressed, however, that the works remain the intellectual property of the creators. “We only keep the right to show them at festivals and our website,” he noted.

There are over 600 different movies available on the Wapikoni site.

Mr. Buzzetti-Melancon noted the incredible work ethic of the youth who took the opportunity to explore filmmaking and sound recording. “We would often be giving people a ride home at 11 o’clock at night,” he said. “They would work for hours because one second of the film was not right the way they wanted it.”

The screening, which took place in the gymnasium of Wasse Abin High School before an appreciative crowd that included the home town folks and a group of visiting world youth from Tanzania, began with three films from other communities. One chronicled the making of a traditional birch bark canoe, complete with the harvesting techniques of bark, cedar, roots and spruce gum. Another, by Wikwemikong’s own Amanda Roy (at the Wapikoni studios in Montreal), told the story of the quest to build a sweat lodge in the heart of Montreal Island and the final, Wapikoni Speaks Out, reported a presentation by Wapikoni Mobile youth to the United Nations Permanent Forum on Indigenous Issues.

A special film created by the Wapikoni crew entitled ‘The Making Of’ documented the process and individuals involved in the project in Wikwemikong.

The four films highlighted at the screening included a music video by guitar impresario Brian Fox called ‘Grandmother’s Reverie.’ Mr. Fox explained that his grandmother had always been supportive of his musical efforts, but that she had never had the opportunity to see him play following his professional training. The images and guitar work in the video meshed professionally together to enthrall the audience.

Jared Peltier and Josh Shaw put together a promotional video highlighting their efforts to create a bike park in their community following the injury of a young cyclist on the road. Bike 4 Life showed what can be accomplished by a small group of determined volunteers with access to large piles of earth. “I didn’t want to see another kid from our community bumped,” he said, using the colloquial reference for being hit by a car in explaining what motivated him and his friends to build the park. He accepted his certificate and award with an impassioned plea for safety equipment for the youth of his community.

Brandon Shawana’s experiences in the foster care system and Children’s Aid Society, or rather his experiences in reintegrating with his family and community after time ‘in the system,’ offered a rare glimpse into the mind and emotions of someone who has been torn from his family and his community—from a slightly different perspective than that normally portrayed. We travel from the depths of despair and alienation into a rediscovery of the importance of family and friends. Images of the Manitoulin Sea Cadet Corps feature prominently in the film. “Children are the leaders of tomorrow,” said Mr. Shawana. Although there are dark moments in the beginning of his film, the transition to a message of hope and possibilities put forward by Mr. Shawana are inspiring examples of the power of “family and friends.”

Elliott Simon’s ‘Ways of Yesterday’ follows the story of the power of poetry and break dancing in repairing and building spirit. The film decries the plethora of negativity inherent in society’s response to youth in Wikwemikong. Rather than spending thousands of dollars on more police, he suggests, putting that money into accentuating the positive things going on the community might be more effective. The dance and rhyme in the film are convincingly overlain with a narration that brings the viewer into the power of dance and spoken word to heal and build the spirit.

“I like to think that 100 or 200 years from now people will see these films and think ‘that is what my grandparents or great-grandparents were all about’,” said Mr. Buzzetti-Melancon.

The films and original sound recordings will be available for viewing and listening at Wapikoni.ca.