MANITOULIN—Actor Greg Odjig made an interesting discovery as he scanned two Debajehmujig playbills that adorn the walls of The Expositor newsroom. “Hey, I’m Gregory Fisher on this one (‘Biidaasigekwe—Sunlight Woman’) and Gregory Odjig on this one (‘Toronto at Dreamer’s Rock’),” he laughed.

Mr. Odjig has a long and storied career as an actor, most recently to be found among the cast of the popular television series ‘Outlander,’ based on Diana Gabaldon’s historical time travel book series of the same name. It was a gig that saw him travel to Scotland for filming and you can catch him onscreen in season four currently running on the W Network (formerly the Women’s Television Network).

According to the movie site IMDb, ‘Outlander’ “follows the story of Claire Randall, a married combat nurse from 1945 who is mysteriously swept back in time to 1743, where she is immediately thrown into an unknown world in which her life is threatened. When she is forced to marry Jamie Fraser, a chivalrous and romantic young Scottish warrior, a passionate relationship is ignited that tears Claire’s heart between two vastly different men in two irreconcilable lives.”

But Mr. Odjig’s filmography is both extensive and eclectic, including recurring roles on the hit television series as Trevor in ‘Hard Rock Medical’ and stints in other television series such as Big Native in ‘Letterkenny,’ Elijah in ‘Mohawk Girls,’ Running Bear in ‘Fargo,’ Trevor Blueweed in ‘Cashing In,’ Tangle Hair in ‘Hell on Wheels,’ among many others, and he played the teenaged Elijah in the television movie adaption of Indigenous political pioneer and activist Elijah Harper.

Mr. Odjig, a Debajehmujig alumni, traces his being bitten by the acting bug back to being with a Debaj production in Toronto. “Me, Joe Osawabine and Bruce Noakwegijig, we were these young punks running around causing all kinds of mischief, so they gave us jobs, things like timekeeper and tearaway boy, just to just get us to settle down,” he laughed. “The crew all went to town and Joe and I got a hold of the scripts and went up on stage and started acting. We were 11 or 12 at the time.”

Soon Mr. Odjig found himself in his first big mainstage production at the Northern Lights Festival Boreal performing with Debaj as part of the cast of the hit play ‘Lupi the Great White Wolf,’ a traditional tale as retold by Esther Osche.

“Lupi really opened a lot of doors for me,” said Mr. Odjig. “It was a really, really big production.”

But if you were really to go back to his roots you might find a five-year-old Gregory Dominic Odjig lip syncing to Corey Hart with his brother Jonathan Fisher. “I always liked attention,” he laughs. “I come by it naturally I think. I’ve always had a bit of the Trickster in me.”

Although his early work was all in theatre, “at least up to 2007. Then came Elijah Harper. I was doing some TV stuff, got to perform with Graham Greene. I was invited to the Stratford Festival for the 50th anniversary and got to play on one of the mainstages there.”

Like many aspiring actors, Mr. Odjig had to find a way to support himself during the lean periods and cleverly, he sought out work in the film industry as part of the production crews. “I started working in the grip lighting department,” he recalled, noting that he also found work with the sound crews. “Lots of times I would be walking past a set on the streets of Toronto and someone I knew would spot me and ask if I could step in to help because someone hadn’t shown up,” he said. “That was around the time I changed my name as an actor.”

There were two reasons for his move from the name “Fisher” to the Anishinaabemowin “Odjig.” They have the same meaning, he notes, and there was the move to a recognition of his heritage, but there was also a practical career consideration.

“My first focus was on my acting career,” he said. “So I didn’t want someone to check my credits and have all of the production work I’ve done coming up instead of my acting roles.” By switching fully to his Anishinaabe name as an actor he solved that issue nicely.

“I learned a lot from Graham Greene,” said Mr. Odjig. “I remember one time I was working on something in the background and I was doing all these actions. I wanted to draw attention to myself, but Graham said to me ‘you are doing all of that for nothing, making it hard on yourself, just stick to the simple job and you will come out fine’.”

As for formal training, most of Mr. Odjig’s background has been in the trenches as a working actor, but he did take advantage of the outstanding theatre arts program at Sudbury Secondary School. “It was a very good program,” he said. “I majored in dance at Sudbury Secondary—dance and music.”

If you watch any hit television program on Netflix over the past several years, you probably have heard Mr. Odjig, even if you haven’t seen him. An example is the hit series ‘Frontier’ with the incomparable Jason Momoa. “I did voice looping for that,” he said, explaining that when you hear the “Natives” talking in the bar when Momoa’s character walks in, that is likely Mr. Odjig’s voice added into the background. “Anishinabemowin speakers will probably get a kick out of what I am saying in the background,” laughed Mr. Odjig. “I am having a lot of fun with it.” The conversations were fairly authentic, he assured The Expositor.

Although he began in theatre, his recent work has been dominated by film and television. “I kinda miss it,” he said. “There is an immediacy, a living thing, when it comes to being onstage in front of a live audience. But I get that fix through my professional wrestling.”

Those familiar with Mr. Odjig recognize him as the man who brought pro-wrestling to Wiikwemkoong. “I did it for the kids,” he said. “Truth is the shows usually wind up costing me money, but it really has been a great experience. I have had the opportunity to meet so many of my childhood heroes. Guys like Jake “The Snake” Roberts and Bushwhacker Luke (Williams).” Mr. Odjig even bought his own wrestling ring and works with a number of wrestling organizations to create shows. It is demanding both mentally and physically, but you couldn’t ask for a better analogy for the film industry, he says. “You get slammed to the mat, and it hurts, but you get right back up and finish the job,” he said. “You always finish the job.”

Entering into the slightly more senior ranks of Indigenous actors, Mr. Odjig was asked what he would advise a young aspiring Anishinabe actor.

“Go to Weengushk (Film Institute),” he said. “They are amazing and will give you a lot of what you need to succeed.”

Once you are in the acting community, noted Mr. Odjig, you will find a welcoming embrace. “The Indigenous acting family is just that, a family,” he said. “We pretty much all know each other, we are supportive of each other.” He adds that many of his acting jobs have come about through the recommendations of the people he has worked with and met over the years.

One of the biggest changes he has seen in the film industry in recent years is the move toward authenticity that has taken place. “That is one of the beautiful things about ‘Outlander’,” he said. “They have hired First Nations people from across Canada to play the Cherokees and the Mohawks and really tried to make it as realistic as possible.” A far cry from the days of White Indians howling out of the hills in Hollywood westerns. 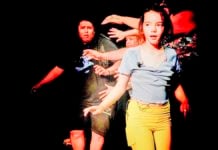 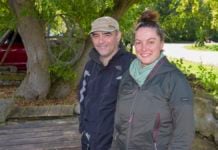 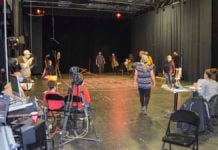 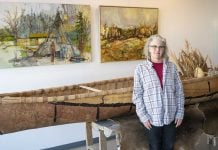 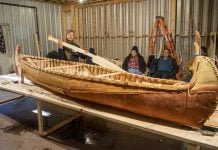 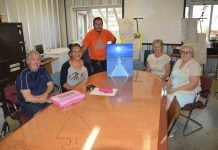