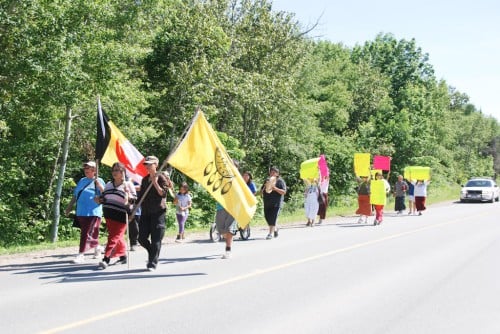 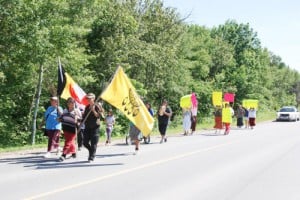 Beginning early Thursday evening, the protestors began to block traffic for all those trying to come to or leave Wikwemikong, demanding that Chief Hazel Fox-Recollet meet with them to hear their concerns.

For hours, the grandmothers and their supporters stopped traffic to bring attention to the issue of drugs in the community, angering some in their attempt and making others proud.

Marian Peltier, the grandmother who had begun the protest three days earlier, explained that following a protest march to the band office and the smudging of the building earlier that day, she and her supporters were left with an overwhelming feeling of sadness.

“When we got back to the boundary line, I started to cry and told the other grandmothers, ‘we have to do something’,” she explained. “I said, ‘let’s close the road’ and that’s what we did.”

The grandmothers let the Wikwemikong Tribal Police know that they wouldn’t let traffic through unless the chief came to talk to them. At 2:30 am Friday, Chief Hazel Fox-Recollet came to the protest site, Ms. Peltier explained, noting that by that time the grandmothers were in a trailer located on the site, gathering their thoughts and questions for the chief. By the time they left the trailer, the chief had already begun speaking to the rest of the assembled group. Some of the councillors were already there too, showing their support, she added.

“‘How come you didn’t follow the motions?’ I asked her,” Ms. Peltier said. “‘If you had just followed the motions, none of this would have happened’.”

The motions Ms. Peltier referred to were resolutions passed at previous council meetings in regards to the drug problem facing the community—resolutions she felt were never acted on.

One of the elders then told Chief Fox-Recollet she should quit, Ms. Peltier noted. She followed by her telling the chief she “was weak.”

“Someone suggested she quit so she did,” she said. “I personally think she should just go back and fix the problems.”

“I’m still kind of sad and not really happy with what happened,” Ms. Peltier added. “It was a peaceful protest just to get rid if the drug dealers. We had questions for the chief that we wanted answers to. We didn’t force anyone to resign. People are saying it’s our fault, but it’s not.”

According to informed sources, during the Monday night meeting of council it was decided not to accept the chief’s resignation. While she wasn’t in attendance, she will be asked to attend next Monday’s meeting for in-camera discussions.

As for the grandmothers, “We’re going to back off for a little while, but the minute a youth is hurt, we’ll be back at the boundary, watching the vehicles coming onto the reserve in the middle of the night to let them know we didn’t quit,” Ms. Peltier said.