WIIKWEMKOONG­––The 45th running of the Wiky Road Race, held this past Sunday, was a great success despite the weather’s efforts to put a damper on the annual race. Weather alerts calling for a torrential downpour on the morning of the race did little to deter the 53 runners and 34 walkers who braved the elements in order to participate in what many typically described as a fun race.

Yvonne Harbinson of Wiikwemkoong, who has recently come back to her home community, and is currently undergoing chemotherapy, was in great spirits prior to the race as she prepared to participate in the walkers’ division. She expressed that she was there to “finish the 10-kilometre route and to have fun.”

Friends Simon Diebel and Tanner Oreskovich were in Wiikwemkoong to participate in the runners’ division. Mr. Diebel, a seasoned vet, “used to do (the run) as a kid” and is pleased to be continuing the tradition since moving back to the island in recent years. This will be his third consecutive year running the race which he characterizes as a “good, fun fitness activity to do” in which he can prove to himself every year that he can still run 10km while always trying to do so under an hour.

Mr. Oreskovich, on the other hand, is a first-time participant, taking up the invitation from Mr. Diebel to join him in the run. He ran cross country races in high school but hasn’t been running regularly since being in university. However, having just recently turned 25, he’s started running again in an effort to “get in better shape and to be healthier at 35 than 25.” He set himself a personal goal to finish the race in “just a little under 50 minutes.”

The race was won by recent 50K Canadian Trail Championships Lost Soul Ultramarathon winner Evan Bayer with a time of 34:45. Mr. Bayer, who was awarded The Manitoulin Expositor Trophy for top male finisher, was supposed to fly back to Calgary on Saturday after a visit with family but opted to bump his flight in order to participate in the race. He was feeling good coming into the race and was “hoping to be a bit faster” but conceded that the weather played a factor in his final race result. Despite not having the result he would have liked, he was pleased to be back in the race which he last ran while in high school in 2001.

The Board of Education Award for top female finisher went to Michelle Kennedy with a finish time of 42:52. Kennedy said that she actually enjoyed the rain because “when it rains it adds an extra challenge.”

After the race, this reporter caught up with friends Diebel and Oreskovich to get after race impressions. Mr. Diebel found the race to be very tough with the rain and cold weather but was still pleased at having broken his time goal of well under an hour and likewise Mr. Oreskovich also met his goal by about 10 seconds, “which was good considering the weather, which was pretty bad.” Both friends say that they will be back next year.

There were plenty of long time friends in attendance at the event including two of the original founders, Henry Hoy and Larry Leblanc, along with seven-time race winner Jerry Holliday and first ever race winner Randy Rivers.

Mr. Rivers, who is now living in Toronto, was pleased to be back at the race and expressed pride in the runners as well as the organizers for continuing to organize the event annually which, he stated, he was “very happy about.” He’s looking forward to returning in coming years to perhaps run the entire race.

In the early days when the race was in its infancy, Mr. Leblanc said he never imagined it at this level and is “happy to see that it’s still going on and that the Wikwemikong Health Centre has taken it on” because the race isn’t just about the running, but is also about a healthy community. Mr. Leblanc commended the runners “as one tough crowd” for running in the wind and rain and with Mr. Bayer the 2016 Canadian National Duathlon champion in the race, they were also up against some pretty tough competition

Mr. Hoy, one of the key organizers, attributes running to saving his life after having a minor heart attack and continues to be involved in the run because “it makes everyone feel good.” When asked about how the run began and the need for having a 10K race in the community, he explains that doing so was key to getting young people running and that at the time there was no other 10K race around for the youth to be involved in. He is especially proud of the fact that this race has an “under 8” age category, whereas many other races have the bracket of 12- to 13-year-olds as their youngest age category.

Jerry Holliday, who ran a summer running program in Wiikwemkoong, came to the race expecting that he might witness Mr. Bayer breaking one of his old records. Due to the inclement weather, Mr. Bayer’s former high school coach did not get to witness any new records but hopes that he might at another time in the future. As for Mr. Holliday, he does think about running the race again but is “not looking to break any more records.”

An awards ceremony was held immediately after the race in which special thanks was given to Daniel Wassengeso and the Wikwemikong Health Centre for taking the reigns and continuing the key organizing of the race.

The race brought out many return participants as well as first timers, including Ross Wilson from South Africa who found the Wiky Road Race while ‘googling’ nearby races. The race was an opportunity for old running buddies, organizers and coaches to reminisce about days and runs gone by while new runners were able to start new traditions and create new memories. The weather, despite its best efforts, was not able to beat any of the 87 Wiky Road Race participants, so while not everyone may have won a medal, they all won the day! 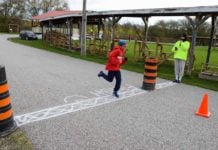