In loving memory of Wilf Hardman, a resident of Gordon Township, who died at his residence on Thursday, October 13, 2011 at the age of 70 years. He was born at Wiarton, son of the late James and Margaret (Shier) Hardman. Wilf had worked for the Department of Agriculture and Food in the ARDA program from 1969 until 1986. In 1986, he and Jean bought what was to become Hardman Photo and TV and was a member of the Gore Bay Rotary Club. He had a variety of interests which included hunting, fishing, four wheeling, snowmachining, reading and quite enjoyed socializing with friends. Wilf’s greatest love was his family. They were all very important to him and family get-togethers were his favourite times. Many humourous stories will be told for a long time, of Wilf’s sense of humour and adventures. He will be truly missed by all who knew him. Wilf is survived by his beloved wife Jean (Bartman) Hardman. Loving and loved father of Jamie and his wife Monique Seguin of Acton, Billy and his wife Miranda Maitland of North Bay and Cathy and her fiancé Osiris Felix of Uruguay. Proud grandfather of Madeleine, Cameron and Bryson. Dear brother of Barry and his wife Linda of Owen Sound and Linda and her husband Neil Walker of Newmarket. Predeceased by a brother Robert. Friends called at the Culgin Funeral Home after 7 pm on Friday, October 14, 2011. The funeral service to celebrate Wilf’s life was conducted in the Lyons Memorial United Church on Saturday, October 15, 2011 at 2 pm with Pastor Maxine McVey officiating. Interment in Gordon Cemetery. If so desired, donations (by cheque only) to the Gore Bay Medical Centre, Lyons Memorial United Church or the West Manitoulin Cancer Society would be appreciated by the family. Condolences may be left at www.culginfuneralhome.ca. Culgin Funeral Home, 705-282-2270. 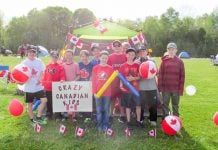