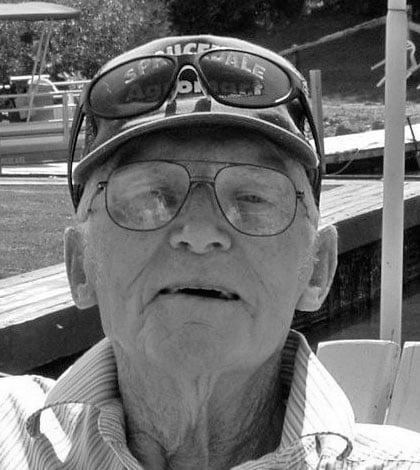 Once of Hamilton, Bill died peacefully in Mindemoya, Ontario, on January 21, 2014, in his 91st year. Son of the late Donald A. and Helen Mackan, he is predeceased by siblings J. Kevin, James J., D. Gordon, Reverend Patrick C.R., Margaret Mary, and Mary Therese (Holmes), his sister-in-law Mae (J.Kevin), and his brothers-in-law Fergus Holmes (Mary) and John Land (Sheila). He is survived by his sister Sheila E. Land of Hamilton, brothers Thomas N. of Hamilton and Paul A. of Ottawa, and his sisters-in-law Rita Mackan (Gordon) of Burlington and Mary Catharine Mackan (James) of Sault Ste. Marie. Bill was well-known in automobile sales in Hamilton before moving to the Manitoulin in the 1970s to join Timberlane Rustic Lodges as the “Harbour Master”. Dozens of nieces and nephews will miss him, as will his many friends on the Manitoulin. As he wished, his remains have been cremated and no ceremonies are planned.