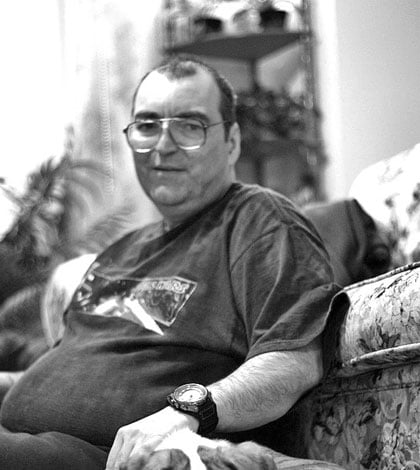 With heavy hearts the family share the passing of William (Bill) Jenkins Rumley of Chuckey, Tennessee on December 19, 2013 at the age of 52. Lovingly remembered by his wife of four years Frances (Fran) Willis, son William (B.J.) Rumley, parents Orton and Ruth Rumley, sister Eldene Rumley and fiance Brian Shepard, nephews Gye, Devin and Brett, sister Mary Lou Reynolds and husband Alan, brother Morris Rumley, nieces Dawn, Jennifer and nephew Wilfred, numerous uncles, aunts and cousins. Bill attended Manitoulin Secondary School and then Sault College, graduating from the metallurgy program. He was an accomplished welder and took immense pride in his work. During his 28 years with Lafarge Group’s Manitoulin Quarry he enjoyed various roles within the company, finishing his career as production tower operator. He retired in 2009 to marry Fran and move to Tennessee. A long time resident of Meldrum Bay, Bill loved spending time with his son B.J. He was a magnet for the neighbourhood children, towing them in the wagon behind his ATV and feeding them his special recipe of mac and cheese. A talented musician, Bill played guitar and violin, following in the footsteps of his father and grandfathers. He perpetuated the Rumley family tradition of music by passing the love of it to his son B.J. Bill enjoyed his new home in Tennessee, he considered no snow to shovel a great bonus. The Willis family warmly welcomed Bill into their fold, they shared a great love of music. Bill and Fran adopted an animal shelter puppy and Bill and Sprocket became best buddies. Bill enjoyed touring the beautiful countryside, the panoramic vistas of the Great Smoky Mountains and his visit to Memphis and Graceland Mansion were an especial highlight. A hockey enthusiast, Bill was a die-hard Habs fan. He loved his bacon crisp and his pizza loaded. Bill had a unique sense of humour and wit, he will be truly missed. Within our hearts and in our memories, those we love remain with us always. What a beautiful difference one single life made. A memorial service celebrating his life was held in Tennessee on January 7, 2014. A memorial committal service will be held by the family at the Silver Water Cemetery in the spring.