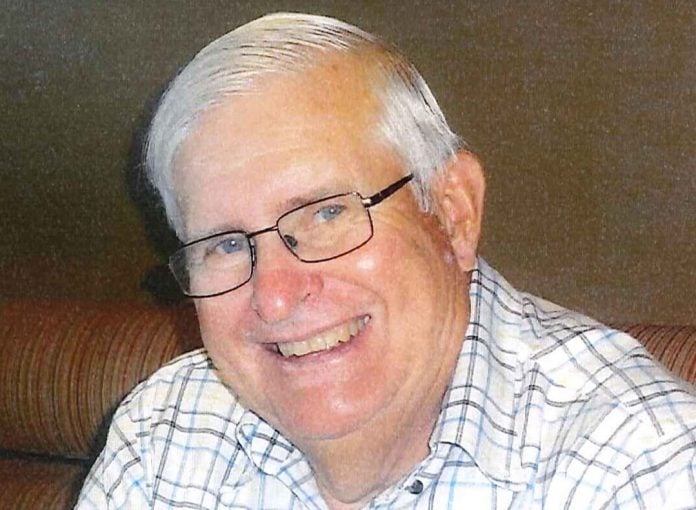 WILLIAM GEORGE (BILL) ROCK
January 31, 1943 – June 25, 2020
William George (Bill) Rock, age 77, of Barrie Island, passed away on June 25, 2020 at the Manitoulin Lodge in Gore Bay, Ontario where he had resided for the past six years. He is survived by his loving wife Carolyn Lane-Rock and his two sons Christopher Harold (Trusha Luthra) and Jeffrey Thomas both of Toronto, as well as his brother Bruce Neagle (Sandra), sisters-in-law Gloria Tuck (Bruce) and Grace Turner (Bryan), brothers-in-law Ted Lane (Lorraine) and Rudy Hillman (Beverly) and many nieces and nephews. Bill was born on January 31, 1943 in Galt, Ontario to Earnest and Margaret Rock (predeceased). Bill was also predeceased by his sisters Marian McKay (Cecil), Dorothy Murphy (Tom), brother Ralph (Beatrice) and his sister-in-law Julia Lane Hillman. Bill went to High School at St. Jerome’s in Kitchener. Later, he briefly attended Catholic Seminary in Guelph and then Loyola College in Montreal, graduating in 1967 with a Bachelor of Science in Chemistry. He worked for Imperial Oil as a Lubrication Engineer and Sales Associate, finishing his career as an Accounts Executive in Sudbury calling on the woodlands and mines across Northern Ontario. Bill and Carolyn married in 1980 and made their home in Sudbury. He was always a gentle, kind and supportive husband and a loving and present father to his two sons Chris and Jeff. Bill was an avid stamp collector, as well as a serious art collector. He especially enjoyed the family cottage on Barrie Island where he loved to fish, read, play cards and entertain the neighbours. He served as a Scout Leader and Presbytery Representative at St. Peter’s United Church. He also served in the Sudbury Arts Council for several years. Bill served on Municipal Council for The Township of Barrie Island. In his retirement, Bill and Carolyn spent time in Florida, at the cottage, as well as travelling extensively throughout the world. The family wishes to extend their deepest gratitude to Dr. Wilson and the staff of Manitoulin Lodge, who cared for him with compassion and concern during the six years that he journeyed through his Alzheimer’s experience. Funeral arrangements are entrusted to Simpson Funeral Home, Gore Bay. A private graveside ceremony was held at the Gordon/Barrie Island Cemetery and a public service on zoom will be held at a later date. In lieu of flowers, donations can be made to Lyons Memorial United Church, Manitoulin Lodge, Metropolitan Community Church of Toronto or The Northeastern Ontario Cancer Treatment Centre.