Women’s deaths by murder increased by 43% in past year

MANITOULIN – November is Woman Abuse Prevention Month and rarely has the issue of violence against women been raised against a more chilling background. Murders committed against women in Ontario have risen a terrifying 43 percent in the past year—this against the sobering fact that, according to 2019 data, a woman is murdered in Canada every six days.

November 25 is the International Day for the Elimination of Violence Against Women and to raise awareness of the issue, municipalities and First Nations across Manitoulin Island will be raising the Wrapped in Courage flag and proclaiming the launch of 16 Days of Activism Against Gender-based Violence. The proclamations and flag raisings signal each community’s commitment to ending gender-based violence in their community and to ensure survivors of gender-based violence know they are not alone.

“What concerns me is the level of acceptance that we now seem to have around woman abuse and gender-based violence,” said Manitoulin Family Resources executive director Marnie Hall. “Years ago, it would be argued that it didn’t happen. We have gained knowledge and understanding through the years and now gender-based violence is generally understood to exist. With that, however, are we finding ourselves at a place of complacency with it? On both an individual and a collective basis, are we actively working to address it and eradicate it, or are there times that we are stalled at the acceptance phase? We acknowledge gender-based violence, but are we addressing it? Woman abuse continues to occur within our societal structure, a structure that we shape. If we don’t actively work to eliminate it, it will remain and people will continue to be harmed and killed.”

“Being born or identifying as female should not increase your risk of harm or death in Canada in 2021,” Ms. Hall stated flatly. “Being a woman of colour, or Indigenous, increases that threat exponentially and this can’t continue to be acceptable. The gender-based violence sector was under-resourced and underfunded before the pandemic, and the ‘stay at home’ orders of 2020 sadly highlighted the very real threat of woman abuse.  To see a 47 percent increase in femicide one year later in our province clearly identifies that not enough is being done to protect women and children.”

Throughout the month of November, the Canadian Women’s Foundation (CWF) is asking Ontarians to wear a purple scarf to show support for survivors who’ve had to endure gender-based violence in their homes, communities and workplaces. The purple scarf is a symbol of the courage it takes to seek support and safety from violence.

Central Manitoulin Mayor Richard Stephens made the proclamation recognizing Woman Abuse Prevention Month during the November 11 municipal council meeting and that Central Manitoulin is the home of MFR’s Mindemoya headquarters and the site of Haven House women’s shelter there.

Gender-based violence is an often invisible issue, notes a release from the CWF, and many women and gender-diverse individuals may not be aware of the services that are available in their community. “Every Ontarian has a key role to play when it comes to addressing gender-based violence and preventing femicide,” continues the release, “each of us can take action to address gender-based violence in a meaningful way today by talking with those close to us about how shelters in our community play an essential role for survivor safety through their programs and services and continue to have services available throughout the pandemic.”

Manitoulin Family Resources is an Island agency which provides safety and support services to survivors of gender-based violence and their children.

Keeping the issue front of mind of political actors during these challenging times requires a concerted community effort. “By contacting your municipal, provincial and federal politicians and letting them know you want them to take action to end gender-based violence through commitments and planning at all levels of government, you can add your voice to the effort,” notes the CWF. (Note: Algoma-Manitoulin MPP Mike Mantha’s email address is mmantha-qp@ndp.on.ca.)

Connecting with MFR to learn how you can support their services is another way Islanders can make a concrete contribution to this important campaign. MFR and CWF ask that people plan to attend a flag raising in their community on November 25 and make the effort to post and share photos and videos of Wrapped in Courage flags across Ontario. On November 25 Islanders can show their support by wearing or displaying a purple scarf in support of survivors of gender-based violence and post with the hashtag #WrappedinCourage to your social media accounts. 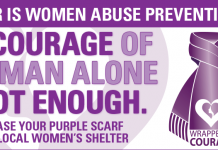