TEHKUMMAH­––On Sunday, June 14, Gordon’s Park Eco-Resort held an open house to celebrate their 25 years in business. People arrived early and the parking lot was full for the afternoon. “This open house is our way of giving back to Manitoulin for helping us to grow and for supporting our efforts,” explained Rita Gordon. “So many people helped us in the early days and we couldn’t have gotten to 25 years without that help. It’s great to see former staff and parents of staff here today. It’s a really good turnout.” 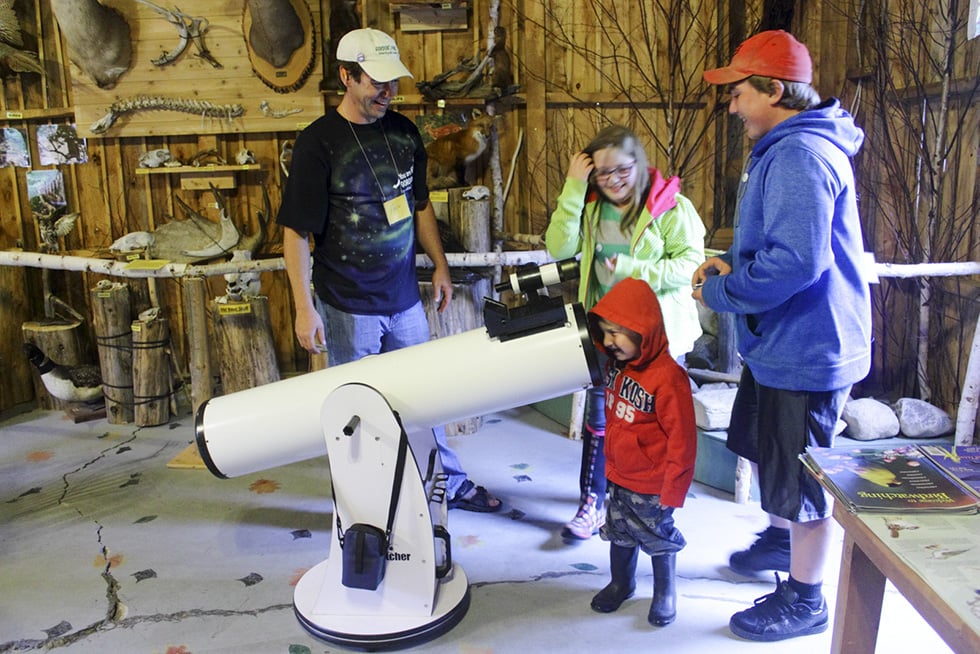 Visitors were treated to hotdogs and homemade cookies as they enjoyed free mini putt, face painting, admission to the Nature Interpretive Centre, educational hiking trails, and looking through a Dobson 8” telescope.

Kim Aelick from M’Chigeeng was a first time visitor. “This is a great opportunity to check it out,” she said. “When you’re local you don’t always get out to local things. It’s nice to know there’s a place to bring friends and family who are visiting the Island.”

Another Islander, Lou Noble, has been visiting since 1993, for archery activities. “There’s been a lot of changes over the years,” she said. “They’ve put a lot of hard work into this place.”

Neighbour Simon Girouard is also a big supporter. “Rita and Terry work hard at what they do. You have to give them credit for 25 years.”

For Ms. Gordon, it’s hard to believe that 25 years have passed since she and husband Terry began developing the eco-resort. It all started when Terry placed a life sized black bear at the side of Highway 6 to draw attention to his taxidermy business. Soon travelers were stopping to take photos and videos. With a large inventory of mounted animals and 100 acres of land, it was a natural progression for the Gordons to develop a tourist attraction fittingly called the “Mounted Animal Nature Trail.” A Canadian musical comedy group, The Arrogant Worms, even wrote a song about the popular trail in 1995.

And so, from humble beginnings rose an impressive facility that today attracts families, adults, and groups from around the world. As interest in the nature trails grew, so too did the educational materials they developed. Eventually they built the Nature Interpretive Centre which now houses the collection of mounted animals in addition to displays of fossils, bones, fish, birds, and a section on astronomy. There are interpretive stations on wild edibles, wildflowers, mushrooms, trees, birds and animals. Camping facilities include tent and trailer sites, tipi tenting, cabins, and a bed and breakfast. There are solar heated showers, flush toilets, a summer kitchen, and a covered picnic area. Other park features include a solar heated swimming pool, an 18 hole miniature golf course, children’s playground, and many interpretive activities.

After all, who could resist exploring the “secret night life of owls” that includes calling for the park’s resident barred owls, searching for signs of owls along the trails, an orientation into owls and their habitats, and dissecting owl pellets?

What about discovering coral fossils from 450 million years ago on a hike through a fossilized coral reef? Listening for nocturnal critters on a guided night hike? Or “getting your howl on,” on a moonlit search for wolf tracks while learning about wolf habitats and species found on Manitoulin Island?

Terry and Rita have built Gordon’s Park from the ground up, with a little help from their friends. Sandi and Dick Gieringer from Ohio are an example. They are manning the barbecue for the open house, wearing wolf themed aprons that Sandi made for the park many years ago.

“We’ve been friends with the Gordons since 1984,” said Ms. Gieringer. “We had cottages next to each other at Watson’s Camp.”

“So we’ve been there from the beginning,” added husband Dick. “I remember they used to have haunted trail walks in July. We and our kids, there were five of us, we used to sit out here in the middle of the bush after dark. We would manipulate the devices to scare people.”

The Gieringers and Terry’s brother Lyle helped build the Nature Centre. Sandi remembers driving around with Terry looking for items in old barns that they could hang on the walls. 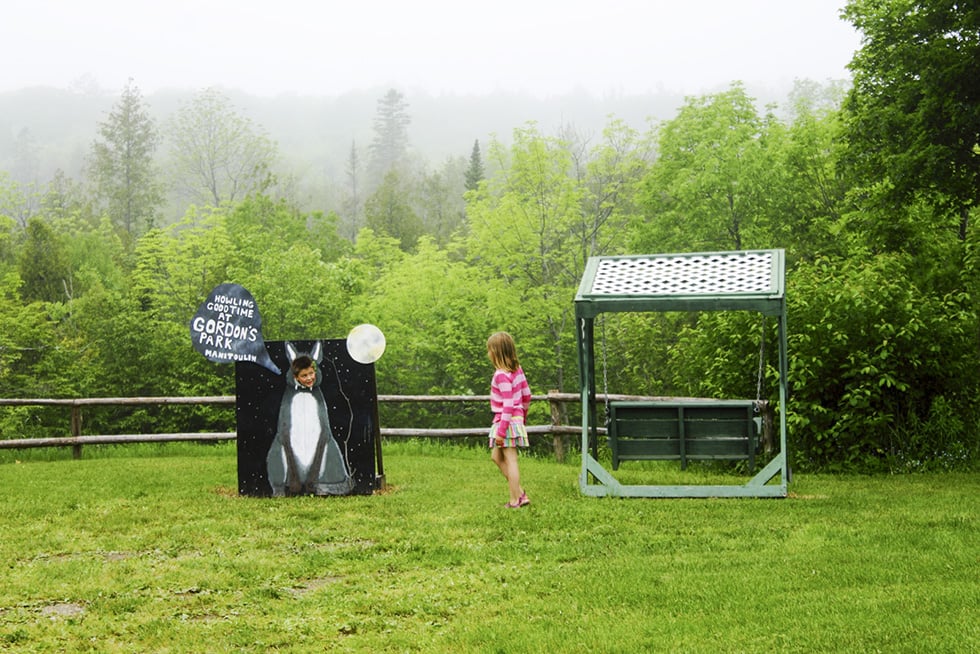 It has truly been a labour of love and they work diligently to continuously improve the overall experience. There are weekly astronomy nights, star parties, and an annual Women’s Outdoor Weekend. New events this year include Art in the Park: Painting the Northern Lights (July 12, August 30, October 10), and a Night Owl Weekend (September 4-7) that combines stargazing, night hiking, and geocaching by the light of the moon. 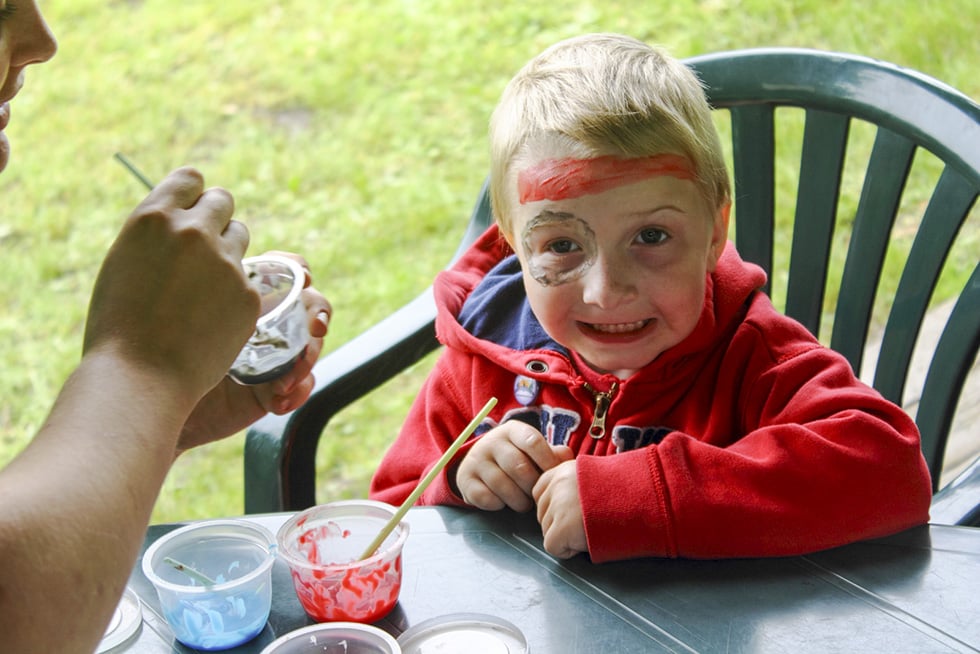 Then there are the small, personal touches such as an internet charging station or the free “little library” for borrowing or trading books. Terry and Rita are strong supporters of Manitoulin Island businesses and the park offers “Rita’s Picks,” a popular map that outlines all the hot spots on the Island.

Group camping sites are new and improved. Gordon’s Park easily accommodates multiple large groups. In 1996 they hosted a rendezvous attended by over 700 scouts and guides. A World Youth Organization gathering in 2000 had over 300 participants, and in 2013 a contingent of 100 Swedish scouts enjoyed a five night stay at the park. Every year Gordon’s Park hosts a private summer camp attended by over 85 youth. Their Dark Sky Preserve is a popular camping site for astronomers, astrophotographers, and those who simply enjoy nature.

In spite of all the hours they work, Terry and Rita manage to find time to charm their guests. Visitors leave here as friends, often returning year after year. Many of their friends couldn’t attend the open house but sent along messages of congratulations. Laurie Hemstreet wrote, “Congratulations! 25 years – Wow! That is a great accomplishment. I know my dad enjoyed the many years he spent at your park and the good company he had with you all.”

Faith Miller wrote, “Your hard work and devotion in creating a small piece of heaven has certainly paid off for all of us.”

In addition to building and growing their park, the Gordons have always been active in their community and have been supportive of the many organizations, including the Tehkummah Fire Department (TFD), that help to maintain the quality of life that Manitoulin offers. TFD Representatives John Greenway and Lyle Gordon along with Tehkummah Reeve Eric Russell were on hand to receive a five hundred dollar donation from Gordon’s Park. “Terry and I want to thank the Tehkummah Fire Department for what they do,” explained Rita. “For their volunteering in the community, not just for us but for everyone in the township of Tehkummah.” 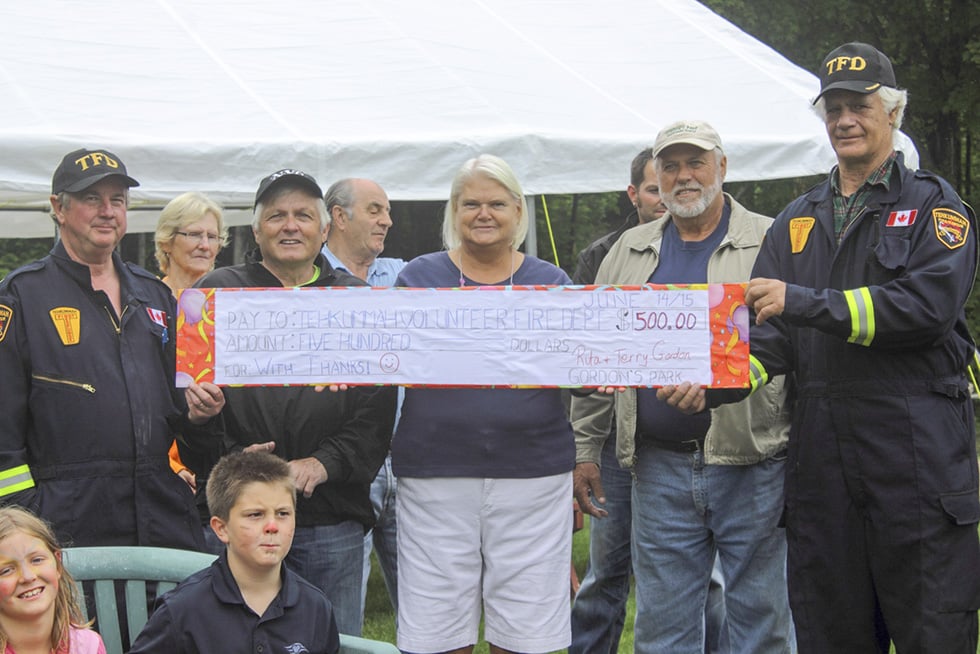 Rita Gordon then thanked everyone for coming. “It’s such a fabulous turnout. There are so many new faces experiencing our park today and that’s just what we hoped for. We also need to say thanks to our friends and cooks today, Sandi and Dick, and to our staff: Noelle, who is orienting visitors; Paul, who’s interpreting in the Nature Centre, and Grace, who’s doing face painting.”

It was late in the afternoon. Rain had held off for the most part but the fog was rolling in. Kids were moving slower, tired from running, climbing, and mini-putt. The last of the hikers were returning from the nature trails, hungry and headed for the barbecue. The day was winding down. This writer overheard a young boy say, “Wow, Dad. That was some adventure!”

It was clear that as they celebrated their past, Gordon’s Park had made new friends for the future.