MANITOWANING – An Assiginack Township waterfront study, which would see an expansion of the marina and docks and beach and Heritage Park upgrades, would cost approximately $2.370 million to be constructed, a senior engineer from a Sudbury firm has informed council. And with this report on the terms of reference for this costing, concerns from councillors were registered about moving the beach and the need for more parking in the area.

John Cannard, a senior engineer from JL Richards, presented the costing report at a council meeting held last week via Zoom. “The total construction costs are estimated at $2,370,00 but does not include stormwater treatment and excludes taxes.” The biggest share of the costs is $1.457 million for the marina expansion.

“I would like to thank you for inviting me to the meeting here tonight,” Mr. Cannard, who is originally from Sheguiandah, told council. “My terms of reference were to prepare a costing estimate for upgrades of the beach area, marina and heritage park,” he said.

“One thing I would like to point out is that when we put the costs together, we were basing the costs on other similar projects we have or are doing,” said Mr. Cannard. He explained the plans include relocating the existing beach to the south of the current beach site in order to extend the marina. “The docks and beach area would have to be moved past the pavilion and south of that.”

“If the beach is moved would there be environmental concerns we would have to consider, because of materials getting into the water?” asked Councillor Christianna Jones. “Are we going to do an  environmental assessment on that?”

Mr. Cannard said, “our terms of reference was limited to working out and costing out the project and the anticipated construction costs. If the work is carried out, the township would want to have a pre-consult with the Ministry of Natural Resources and likely obtain a work permit.” He said an engineering report would probably also be prudent.

“I just wanted to make sure we are thinking about these type of things. If we’re moving the beach, we are moving sand and some will get into the water. We have to think about the costs and environmental concerns,” said Councillor Jones.

Mr. Cannard said moving the beach could have possible environmental concerns and could, for example, have impact on fish spawning in that area. “Most of the activity will be carried out on the shoreline, not in the area where fish spawning is taking place, but it would be good to make sure this is addressed.”

Under section 3.1 of the report, “we would want to relocate the beach to extend the marine. The gravel walkway would be extended, so people have access to the beach area,” said Mr. Cannard.

“I have read the report two or three times,” said Mayor Dave Ham. “I see in the report LeCourt Street would tie-in to the rest of the town streets. Once the project is started, there would be a fair bit of traffic. The small roadway would merge with LeCourt Street and this ought to be looked at.”

While the study did not look at this in the costing exercise, “if you extend the road, there would be a cost to it,” said Mr. Cannard.

“Absolutely, that would be expected,” said Mayor Ham.

Councillor Rob Maguire inquired as to whether the gravel roadway would be for three season traffic and suggested that to prevent a bottle neck on the road, if it was designed for one and a half lanes, this may be a way to manage it.

“That would make sense,” said Mr. Cannard. “Obviously, the road would not be used in the winter. But there would be a fair amount of traffic (in the other three seasons of the year). I would suspect this would be a granular road and (the expansion of the road) may allow for additional boat trailers as well.”

Councillor Jones asked what the plans would be for the old beach in terms of possibly adding parking in the area.

Mr. Cannard explained, “the parking we are talking about would be (by the retaining wall) on the waterfront. Quite often people will park their boat trailers in this area. As for as the existing beach it would move enough to provide enough room to extend the marina. Another option you could look at is moving the dock area.”

“The beach is very important,” stated Councillor Hugh Moggy. “We had better make sure we have sufficient area for parking. I have a hard time to see where there would be parking as it is such a narrow road.”

“We were looking at having as much if not more of a beach area as there is now,” said Mr. Cannard. “As everyone knows, parking will be an issue. There will be more boat trailers and more vehicle traffic. So definitely adequate parking would be required.”

Councillor Dave McDowell inquired as to what the plans are for the SS Norisle, and what expansion plans for the marina would mean for it.

In the costing report for construction, Mr. Cannard said “we’re assuming the Norisle would be gone out of its current site. People been talking about moving it and using it for another purpose for a long time, and we assume for the purposes of the report it would be gone and there would be an area for a float plane base (for emergency purposes).”

“I agree we have to look at all options to maximize parking in the area. Again, however, I will mention our exercise was to look at the costing for the upgrade for the beach, marina and heritage park. Everyone agrees additional parking has to be a big consideration.”

As for marina expansion, Mr. Cannard outlined the plans would be for expanding from 12 seasonal boat slips to 50 slips with an additional six slips for larger boats, and electrical outlets for each type of boat. “We would need to get creative in terms of parking, for instance having vehicle parking behind the retaining wall, for the costing exercise. And there would probably be a need for parking of another 38 trailers with the (proposed) project,” said Mr. Cannard. The project would include refurbishing the boat launch area and replacing the retaining wall and having a new marine centre with a small office and washrooms. This was all looked at in the costing out exercise.”

Councillor Jones said the cost of the small office proposed would be at a cost of approximately $350,000. She asked if the Burns Wharf Theatre, which has washrooms, could be refurbished instead of a new office centre being constructed.

“Yes, and when we did the costing, we didn’t know the future of the Burns Wharf Theatre,” said Mr. Cannard. “But if it is not going to be used in the future, I don’t see why it can’t be used as a building centre for the marina. Our costing was based on construction of a new building. And keep in mind sometimes renovating another existing building might not show any savings. But this could all be looked at.”

Councillor Jones explained there are some showers and washroom facilities in the Burns Wharf Theatre facility.

Councillor McDowell asked, “if we have heard anything from the Norisle society for the last couple of years. I’d like to have an update.”

“There is a plan to move forward on this,” said Mayor Ham. “But things have been tied up for two years (with the pandemic). The fellows in Toronto have met people to look at possibly retrofitting the ship. It  appears to me the plans are moving forward and I’m keeping my fingers crossed it is going to happen. The project hasn’t been put to sleep, that is for sure.”

Alton Hobbs, Assiginack clerk, told The Expositor after the meeting the township will consider in the future if it is going to be applying for funding for the waterfront development, but it will not be part of this year’s budget. 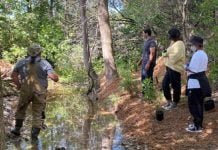