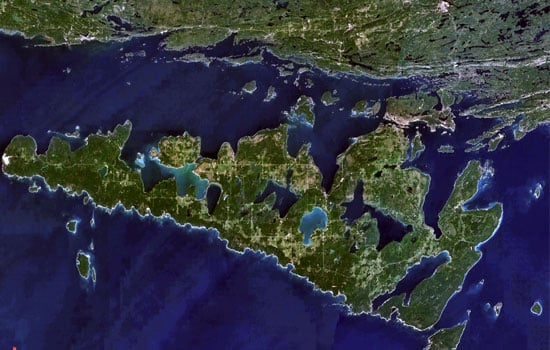 MINDEMOYA—A second public meeting regarding a rezoning application for the Anglin Subdivision in Mindemoya was held May 21 in council chambers with several people in attendance. A previous meeting had seen deputations from four residents of the area who expressed concern for the rezoning which would allow two row housing buildings to be built in an area that is designated for single-family residents. Sherrie MacDougall, who lives in the area, submitted another letter to council before proceedings.

It was noted by Mayor Stephens that Steve Hill, who is seeking the zoning amendment, was not at the first meeting, but was now present. Mr. Hill apologized to those in attendance and explained that he could not attend the first meeting as his father had suffered a major heart attack and he thanked council for the letter of condolences.

Mr. Hill then proceeded to answer specific concerns of the Anglin Subdivision residents, starting with the question that had been asked about what guarantee the inhabitants had that the buildings would be for seniors as he had indicated. “We don’t want to rent to families, just seniors,” he said. “This is not low rental, it is not subsidized housing.”

The next item from the row housing opponents that Mr. Hill answered to, and was in complete disagreement with, was that ‘there is already enough seniors housing in Mindemoya.’ “We are at the edge of the baby boomer generation,” he noted, “and demographics are changing. There is more demand for this housing. Seniors don’t want to deal with snow and they don’t want to deal with grass.”

In response to the concern about water in the subdivision, a particular worry of one individual who has lost her hedge to excess water, has mosquitoes breeding in her area and has an unending wet backyard, Mr. Hill stated that a water concern is a municipal concern. “As a builder,” he added, “I have to have the water run to the ditch. Water has to drain off the property and will drain west to Bay Street. You can’t drain water on to other people’s land. If we develop these lots, it may be better. We want to build quality housing.”

Mr. Hill also answered the question that had been raised about safety. “Seniors are not known for running up and down the street.” he said. “Youth cause noise and so on in an area.” He also went on to say that the development of the row housing would add value to the resident’s property and that seniors are looking for housing that has municipal water and sewer.

Ms. MacDougall also spoke at the meeting, explaining that she was speaking for the residents. “What are you going to do with the water,” she asked. “What do you plan to do? Are you willing to divert the water?” to which Mr. Hill responded, “You have to swale along your property to the drain.”

It was evident throughout the meeting that there are serious water problems in the Anglin Subdivision. Mayor Stephens explained that the municipality ran out of money in responding as to why the drainage wasn’t done. “It doesn’t seem to me to be a major issue, the drain is there. If this project goes through, we will have to look at the whole area. We have to look at programs available.”

Ms. MacDougall also asked what Mr. Hill had planned about privacy fences at the back of the properties and about garbage and snow removal. Mr. Hill responded that there will 30 feet in front of the proposed units with lots of room for snow. When Councillor Derek Stephens then also asked if privacy fences would be a problem, Mr. Hill said “no.”

The question was also asked at the public meeting if the amendment is approved by council can it be appealed, to which Mayor Stephens answered in the affirmative.

As the mayor had mentioned during the public meeting, the job of council is to make a decision on allowing the project to proceed after consideration of everything. A meeting of the finance and economic development committee under chairperson Councillor Alex Baran did just that. “The motion,” Councillor Baran explained, “is that we recommend to council that the amendment be accepted.”

“There has been a fairly exhaustive response to this issue,” Mayor Stephens said. “It has been open to the public, we heard from the proponent. It is up to this committee and council to proceed with this.”

Councillor Linda Farquhar informed council that she was voting against the motion as it is a single residential unit area, that the row housing would spoil the aesthetics of the area, that she thinks that the drainage issue should be solved and “I agree,” she added, “with the gentleman who said that they are going to be on top of each other.”

Councillor Baran noted that he had addressed the four major concerns of the residents at the last public meeting but that the subtle message he was still hearing is no. “I hear the concerns,” he said to the people present. “My inclination would be to not support this simply because you don’t want it.”

Councillor Dale Scott spoke of the drainage concerns saying, “I agree with Mayor Stephens. That is our concern. The south and west drains were done. The north drain from Anglin was done. It was asked if it could go to the south drain. It was left undone and that is our responsibility. I hope we take on that responsibility issue soon.” Councillor Scott went on to say that he agrees with Councillor Baran as the residents “don’t want multi-units.”

Councillor Derek Stephens then observed, “If this doesn’t get to council, we will never get a vote. We will be stymied and that is not right.” Mayor Stephens agreed, saying, “I would like to see it go to council. All councillors should have a right to vote. It needs to go forward.” On Councillor Pat MacDonald’s recommendation that one reading will get it on to council, it was agreed that the zoning amendment be given its first reading and the amendment will go to the next council meeting for a final vote.