MINDEMOYA— The Campbell Horticultural Society held its annual flower show, tea and bake sale on August 5 at the Mindemoya Community Hall. The centre was filled with plants and blossoms of every type and this year featured, for the first time, a display of vegetables. The purpose of the event, as the society says, is to educate and stimulate interest in horticulture.

“The aroma is intoxicating when you walk in,” visitor Kim Moulton said. “And it is visual eye candy. I am a gardener so I know this is a lot of work. And it is very well organized.”

Each year the society has a subject around which members can enter arrangements. This year the theme was Let’s Dance in the Garden and the exhibits were spectacular. The dances included the limbo, country hoedown, square dance, wall flower and ‘may I have this dance?’, which was particularly challenging as the display is miniature and cannot exceed five inches in any direction. Other entries had the titles of the tango, flamenco, prom night, waltz and ballet. There was a separate entry for youth which was titled bunny hop and the arrangement had to feature a bunny. That award was given to Camilla Finlay. For non-member ladies, the dance was ‘jitterbug’ with the arrangement depicting lively movement. This award was won by Alana Lubenkov. For men only, the freestyle design was called ‘after the ball.’ A display from this theme took the People’s Choice Award which was won by Seija Bailey with a tango display. Ms. Bailey also won the President’s Choice Award for her country hoedown entry and a first prize for the best dahlia.

Darlene Lewis took first prize in the best potted plant category and Carol Lang won for best lily. Terry Thompson won first prize for a best in any other variety with Marion Newton taking the honours for the best perennial and Sandra Strong for having the best rose entered in the show. Penny Palonen, who serves as secretary for the society, won for best geranium with Linda Harper having the best African violet and Evelyn Russell-Bher the best house plant. Bernice Lewis has the best outdoor potted plant, Darlene Lewis the best annual, Carol Lang a first prize winning for an Asiatic lily and tree lily. Ms. Lang also took home the Judge’s Choice award. Terry Thompson won for the calla lily category and Mary White the best vegetables. Ms White also won the Best in Show for her beets while Marie Kirk won first prize for her green onions and Laura Scott for the best beans.

The Most Points of Show at the event went to Seija Bailey with 102, Penny Palonen with 79, Terry Thompson with 42 and Marie Kirk with 39.

Don Skrumeda is a member of the society and he is impressed with all the work that goes into these annual shows. “The members do a wonderful job and the lunch too is a lot of hard work and putting everything together. Family recipes are used. And the members are helpful when it comes to garden problems. They will try their best to find an answer for you. They have meetings every month and everyone has a gardening story to tell.”

Barb Grigg was also impressed with the work of the society, saying, “The displays are a lot of hard work by dedicated people. And since the flowers have to be fresh, they have to do a lot of work at the last minute.”

Campbell Horticultural Society President Sally Blackburn-Sloss was pleased with the show and said that she was quite impressed with the number of exhibits and the quality of the work done. She also mentioned that the society welcomes and appreciates new members.

The Society also does a lot of work around communities either maintaining flowerbeds or making donations for the upkeep of various plots. These include the Grimesthorpe Cemetery, the Spring Bay Community Hall, flowers in Providence Bay, the Mindemoya south sign and the museum, the Mindemoya Old Schoolhouse, the Sandfield Community Centre, the Burpee/Mills Heritage Community Garden and Monument Corner.

The meetings for this organization are held the second Tuesday of the month at 1 pm at the Spring Bay Community Hall. 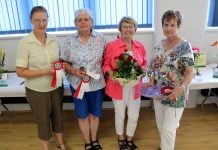 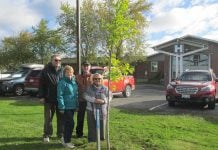 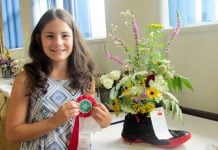 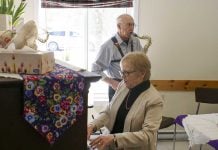 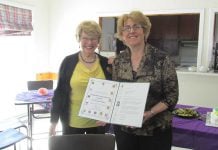 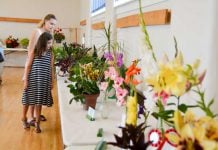