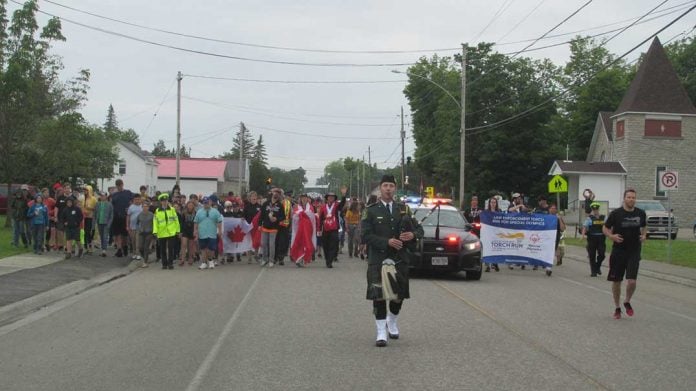 MINDEMOYA – It was an awesome sight last Friday as bagpiper Iain McGale led members of the Ontario Provincial Police (OPP) Manitoulin and other detachments, Manitoulin Special Olympic (MSO) athletes and students from Central Manitoulin Public School (CMPS) through the downtown streets of Mindemoya as part of the annual Law Enforcement Torch Run for Special  Olympics, sponsored by the Ontario Association of Chiefs of Police.

“This is the 15th run we have taken part in, during the past week,” said Constable Shaun Beaulieu, Northeastern Ontario zone coordinator for the OPP Torch Run. “We have OPP officers, corrections personnel and municipal police officers from Sault Ste. Marie taking part.”

“Last night (June 27) we participated when Wikwemikong hosted its very first Torch Run,” Constable Beaulieu told the Recorder. “They had taken the initiative and contacted us about having a torch run in the community. There was amazing community involvement with about 50 people taking part.”

Constable Beaulieu explained, “the Torch Run was introduced in the mid-1980s and Special Olympics is the charity of choice for law enforcement agencies around the world.”

Manitoulin OPP Provincial Constable Marie Ford asked participants just prior to the run in Mindemoya, “are we ready?”

“I would like to take this opportunity to thank and acknowledge all the (MSO) athletes that are here today,” she said. “They have some of their medals on from competitions. These athletes work very hard and are really dedicated. We would like to thank the families of the athletes who are here today, Officer McGale for leading the parade and all the students from CMPS (Central Manitoulin Public School) for taking part.”

The Torch Run started at the Mindemoya OPP detachment office headquarters and went around the corner and past CMPS, with students and staff joining the run back downtown, turning at Wilson’s Corner Store back downtown towards the OPP detachment.

At the conclusion of the run, each of the students and participants was able to enjoy a cupcake.

MSO athlete Matthew Bedard  addressed the large crowd after the run, who talked about his experience in Special Olympics and thanking everyone for taking part. “God bless Special Olympics,” he stated.

Katherine Tipper said, “we would like to thank Constable Marie (Ford) once again and all those from law enforcement in the Torch Run. The OPP does a lot of fundraising throughout the year, with events like the Torch Run, and the polar bear dip, and they host the provincial games every year.”

All funds that are raised across the province through the Torch Run help provide a year-round program of fitness, recreation and competition for the Special Olympic athletes.