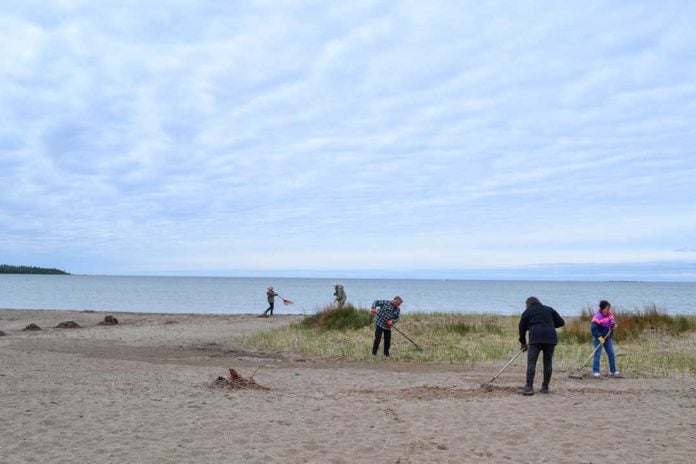 PROVIDENCE BAY—Complaints about the deteriorating state of the world renowned beach at Providence Bay have been mounting through the years from both beach goers as invasive species such as the Asian reed, aka phragmites, and other weeds have overgrown the popular summer recreation spot, but finally help is on the way as a Beach Action Day has been announced.

Following on the heels of a highly successful assault on phragmites last year, the Beach Action Day is seeking to target those plants that do not belong on the dunes. But to be clear, it’s hands off the plants that do belong.

Judith Jones, an environmental consultant, and the owner of Winter Spider Eco-Consulting is helping organize the effort. “The point is to remove invasive species and non-dune plants,” she said. “We are not allowed to remove a lot of vegetation.”

“This is not going to fix everything,” she said, “but it should make things better.”

So leave your tractor and disc at home, this is a much more up close and personal project.

Those wishing to be part of the Beach Action Day are invited to bring their hats, water, sunscreen and work gloves down to the Discovery Centre in Providence Bay on Wednesday, August 3 at 9:30 am, rain or shine, for an orientation meeting and to be assigned to a team.

There are plenty of plants that are now making their homes on the dunes that do not belong there. “One of those plants is white clover,” said Ms. Jones. “White clover is great in a pasture, it makes great hay, but it is not a dune plant.”

Removing everything and leaving a desert denuded of all vegetation is not a good approach, noted Ms. Jones. “Back in the old days the municipality had to remove sand from the streets of Providence Bay,” she said. Some vegetation, those plants that do belong on the dunes, help hold the sand in place and maintain the dunes where they belong.

“That’s not what some people want to hear or believe, but we are not allowed to take away every plant,” she said. But by removing the non-dune plants the ecology of the beach should be greatly improved.

Sponsored by Habitat Stewardship Fund of Environment and Climate Change Canada, the Municipality of Central Manitoulin, Manitoulin Streams, the Province of Ontario, Nature Conservancy Canada, Winter Spider Eco-Consulting and the Campbell Horticultural Society the Beach Action Day at Providence Bay will take place Wednesday, August 3 from 9:30 am to 4:30 pm, rain or shine.

It should prove to be a very educational experience that can help bring the beach at Providence Bay back to the kind of place modern families want to come to visit and enjoy.