MINDEMOYA – Approximately 150 people, including former students and school staff, municipal, federal and provincial politicians, and many others, took part in the 100th birthday celebration of the Mindemoya Old School, this past Saturday.

“Welcome one and all to this 100th birthday bash,” stated Jan McQuay, a member of Friends of the Mindemoya Old School (FOMOS),” in her address to those in attendance.

Jean Brown, a Haweater who now lives in the Kingston area was the official greeter for the day, welcoming everyone to the event, and she encouraged those flocking in to have their pictures taken of all those arriving with the placard, ‘I was here to celebrate the 100th birthday of the Mindemoya Old School.’

Meanwhile, piper Paul MacDonald walked through the crowd just prior to the start of the ceremony playing a rousing tune.

Master of ceremonies for the celebration was Norm Morrell, “the last living principal of this wonderful old school. I came here 57 years ago, in the fall of 1964. That spring I had been teaching in Sudbury and one day I was looking out the window and all I could see was rock and sand. It was at that point that I decided, ‘I’m moving.’ When the (school) board was advertising for the principal position at the school I had been contemplating moving down south. But I thought it might be nice to go back home to Manitoulin.”

“I was 22 years old when I was hired as principal of the school,” said Mr. Morrell, noting members of the school board at that time included Dr. Ken Tipper, Mel Van Horn, Harold Williamson, Charlie Cadieux and Lloyd Hopkins. “We had a school of four teachers with every teacher taking two classes. The principal took Grades 7-8, the Grade 5-6 teacher was Elsie Caddle, Grade 3-4 Kay Moreau and Grades 1-2 Sarah Cannard. And during the year Winnie Cox was hired to teach Kindergarten, and she had to derive her own program for Kindergarten.

“Mindemoya was the best school I ever taught in,” stated Mr. Morrell. “Mindemoya was a town in itself and I met and worked with some of the finest men and ladies. I’ll never forget my days here.”

A few years later he took a teaching job at the Gore Bay High School. “The Gore Bay High School was one of a kind like this (Mindemoya Old School),” said Mr. Morrell. The Gore Bay school was later incorporated into being the main part of what is now known as the Manitoulin Lodge Nursing Home. “Both of these schools (Mindemoya and Gore Bay) were made to last,” said Mr. Morrell. “In the old days it was anticipated that these type of buildings would be put up for a lifetime. And if you visit countries in Europe anything under 200-300 years old is considered a new building. If the Mindemoya Old School was to disappear the town would have nothing, the history of the building and the fibre of the community would be lost.”

Mr. Morrell said, “the Old School is one of the great buildings, institutes in town and it has done more for the local populace as any building in town. I would like to know that it will be around for my great, great grandchildren to see and they can recognize that their great, great grandfather was the last principal of the school. This building is not here for a short time, but a long time.”

During the afternoon Mr. Morrell introduced 93-year-old Nola Haner and Gerald Wagg (son of the late Ray Wagg who had been chief custodian at the Mindemoya Old School when Mr. Morrell was principal at the school). He also recognized Maddie Becks (who was at the celebration) and Jim Nevills, who currently lives in the Wikwemikong Nursing Home, as both being 100 years old and former students.

“I would like to thank the Friends of the Mindemoya Old School for being instrumental in putting this get together on, for all of us,” said Mayor Stephens who was the only Central Manitoulin Council member on hand for the event. “I have to admit that I only spent one year as a student in this school. But that was the way the school system worked back then. I was from the country, and I went to the No. 2 school, which was located halfway between here and Providence Bay. Then in high school I came to the big city of Mindemoya. It wasn’t a one room school, and I felt I was in a castle.”

Carol Hughes, NDP candidate for Algoma-Manitoulin-Kapuskasing in the upcoming federal election said, “I would like to thank everyone for being here today and the organizers of this event, (FOMOS), for all the work you have done and for your kind invitation for me to attend. A big shoutout to Jan McQuay.”

“It is all about conserving the school and making it into something that will be well received and used by members of the community,” said Ms. Hughes. “I know there have been challenges, sometimes that is needed to rally support and the troops and to keep the building alive for all our children and great grand-children. Something they are proud of and recognizes the history of this building. It is really important.”

“I am very pleased there has been that team effort and everyone working together to realize your dreams,” said Ms. Hughes. “To be here to celebrate the 100th anniversary of this school building is quite remarkable,” she stated. “Congratulations to the Friends of the Mindemoya Old School on putting together this 100th anniversary celebration.”

Jan McQuay of FOMOS said, “first I would like to thank the members of FOMOS and everyone for being here today. On the occasion of the 100th anniversary of the school and to all those on hand, please accept our best wishes. We are so happy to see everyone here today. Special welcome to Carol Hughes, Michael Mantha, Mayor Stephens and Linda Kelly, who is representing the Ontario Historical Society (OHS) here today. We owe a huge debt for all the help they (OHS) have given us. And welcome to all those people who have travelled from all over Ontario to be here today.”

Ms. McQuay introduced members of the FOMOS executive which includes Lynn Quesnel, Alison McAllister, Malene Brynildsen, Karen Mackenzie and Arran Quesnel. “I would also like to thank all the many volunteers who helped create today’s birthday party.”

As of Saturday’s celebration, FOMOS included 260 members and is growing all the time, said Ms. McQuay. “We hope to be able to celebrate future birthday celebrations of the Old School.”

Ms. McQuay then outlined that FOMOS’ “next task is crucial; in September we will be presenting our business plan to municipal council. And we started a new petition, that basically calls for transfer of ownership of the building to the FOMOS organization which would result in no further taxpayer responsibility for the building.”

Linda Kelly of OHS told the large gathering, “I provide greetings and congratulations from Robert Leverty, executive director of OHS on the 100th anniversary of the Mindemoya Continuation School, and on his behalf express thanks to all those who have done such hard work and have been so dedicated to maintaining the school. On Monday, Mr. Leverty’s first task is going to be signing letters on behalf of OHS in support of the funding applications from FOMOS for the school.”

Striking up the bands was the next order of business. While everyone in attendance was invited to enjoy their picnic lunch, three bands, Missy’s Groovy Little Band, the Manitoulin Swing Band, and the Dewar Brothers provided musical entertainment for the rest of the celebration. Everyone was later served cupcakes, and everyone had the opportunity to sing ‘Happy Birthday to the Old School.’

There were several draws held for prizes, and Mindemoya Old School shopping bags and beautiful mugs were up for sale. 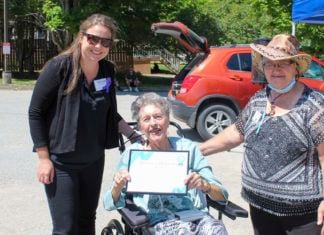