﻿KAGAWONG—Even with a reduction in the costs negotiated by Billings township staff on a proposal for engineering services for renovation and improvements of the township fire hall, these costs are still higher than had been originally anticipated. However, the improvements are needed, and with no guarantee that costs and inflation are going to decrease in future years, council has given the go ahead for this engineering work to be conducted.

“We have a staff memorandum attached to this issue,” Billings Mayor Ian Anderson said at a special council meeting June 15. “At our previous council meeting, we had reviewed the request for proposals (RFP)  for engineering for the firehall renovations. We received one response to the RFP, from Tulloch Engineering, at $106,000. This was higher than had been anticipated. Since then, staff, Kathy (McDonald, township clerk) especially, has been able to negotiate with the company and they have reduced their tender about 10 percent to $94,920.”

“First off, I’m surprised and happy a 10 percent reduction was achieved, which is positive,” said Councillor Bryan Barker. “I thought long and long and hard about the fire hall, and this issue has been on the table for a long time. Previous councils have looked at the issue and what should be done with the fire hall, and as we know, reports have indicated there is mould in the fire hall which poses a health and safety issue.”

Councillor Barker pointed out three options had been presented to council for its consideration and council chose to renovate the existing building. “It’s a Catch 22 as prices have gone up everywhere, on everything. And we don’t know what the future is going to bring if things are going to get better or worse in terms of costs and inflation. But I think we should move forward with a decision.”

“I appreciate the comments made by staff in their memorandum is that we have a growing population in the township, and with it comes increased demand for services, including for fire protection services,” said Councillor Barker. “The bottom line, as indicated in the staff memo, is that a comprehensive renovation of the existing firehall will result in a much-improved building, provide better health and safety for the firefighters and will demonstrate some relative improvement in energy efficiency. It will provide exactly the same level of functional service as the existing building, with no expansion of service space and there is no room on the existing property to expand service space in the future.”

“What we were faced with in the other two options that we had to consider were proposals that the township can’t afford (including a new building being constructed),” said Councillor Barker. “We picked the least expensive. I’m in favour of the resolution and moving forward on this project.”

“The firehall is an important municipal office,” said Councillor Michael Hunt. “We rely on the fire department to provide fire protection and they do an excellent job. The township population is growing, probably the fastest of any municipality on the Island.” Councillor Hunt went on to list all the improvements that the fire hall will receive with the renovations, adding, “I think all of these renovations will help to make a great addition to the fire hall.”

Councillor Sharon Jackson said, “as Councillor Barker indicated, this issue has been on council’s plate for quite some time. I think it is important to move forward, so the firefighters have safe, usable space to provide firefighting services.”

“And our community is growing, based on the 2021 census statistics,” said Councillor Jackson. “It is important that we move forward. Our firefighters need a safe, healthy place to work from.”

“The fire hall is really important to the township,” stated Councillor Sharon Alkenbrack. “Our township is growing and what to do with the fire hall has been an issue for several councils over the years. The firefighters have been gracious in waiting for improvements to be made and it would be nice for them to be able to work in a nice, renovated building.”

“I agree,” said Mayor Anderson. He said that, regarding the ballooning prices of everything like materials and labour, the US inflation rate is now at eight percent and Canada is not far behind. “So, there are no guarantees that prices will increase or decrease. I don’t see things changing and things could get even more expensive for these type of things.”

Mayor Anderson noted there have been no funding sources made available for municipalities for new fire halls during the entire term of this council. “While the township has accomplished a lot over the past four years, the fire hall is still in disrepair, and is somewhat embarrassing. We need to do something to make it safer, health and safety wise, for our firefighters.”

“We can’t afford a new fire hall because almost all the costs would be borne by municipal residents,” said Mayor Anderson. “But repairs and improvements need to take place.”

Council was unanimous in voting in favour of moving forward on the issue with Tulloch Engineering providing engineering services for the firehall renovations. 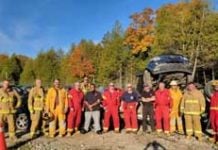 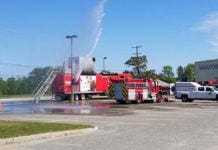 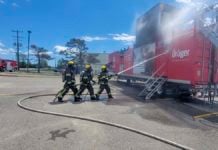 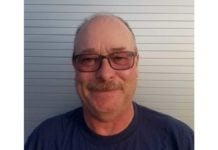