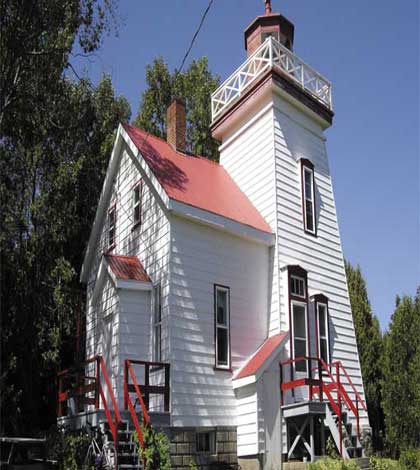 MANITOULIN—Fisheries and Oceans Canada has sent forward a draft purchase-transfer agreement to municipal councils for two of the five lighthouse properties on Manitoulin Island being looked at for transfer to local municipalities. However, Billings Township council members have raised concerns with the proposed agreement.

“A draft (transfer agreement) has been sent out to local councils for the Kagawong Lighthouse (Billings Township) and for Janet Head Lighthouse (Gordon/Barrie Island) for the transfer of the lighthouses to the municipalities,” said George Fine, client liaison with Fisheries and Oceans Canada, on Monday.

Mr. Fine acknowledged, “the grant agreements are basically the same for both those lighthouses.”

The Recorder has learned that as part of the transfer, Billings Township has been offered $20,000 for repairs and maintenance of the Kagawong Lighthouse.

“As for the other lighthouses on Manitoulin, there are still discussions being carried out and we are in the throes of having the draft agreements finalized,” said Mr. Fine. “We are still in discussions with the community of Meldrum Bay for the Misisissagi Lighthouse, and the same for Strawberry Island (with the Northeast Town). As well the Manitowaning Lighthouse is also still being discussed for transfer and we are awaiting a draft purchase-transfer agreement to be finalized and sent out to the municipality.”

Mr. Fine would not divulge the details of any of the agreements at this time until they have been officially transferred over to the local municipalities involved. However, he told the Recorder, “there has been correspondence with local councils and area First Nations on all of the lighthouses.”

Billings council was told at a meeting last week the agreement for its lighthouse was still being looked at by its lawyers, and if council had any concerns or questions they should be forwarded to the legal counsel.

“In my initial review of the agreement it appears the ministry has a lot of tentacles around it, it almost sounds as if they are walking away from it,” said Councillor Brian Parker, noting it appears the ministry would still have control over the lighthouse, but the township would have to maintain and provide upkeep costs for the lighthouse building to the standards of a heritage building status.

Ms. McDonald pointed out the transfer would be a designation under the Heritage Act.

“First we need to outline what our concerns are and relay them from our lawyer to the ministry,” said Mayor Austin Hunt.

After the council meeting Mr. Hunt told the Recorder, “council feels there are some things in the agreement that could be restrictive to us,” at this time, pointing out however, amendments can be discussed on the agreement with the ministry, as is the case in any transfer-agreement.