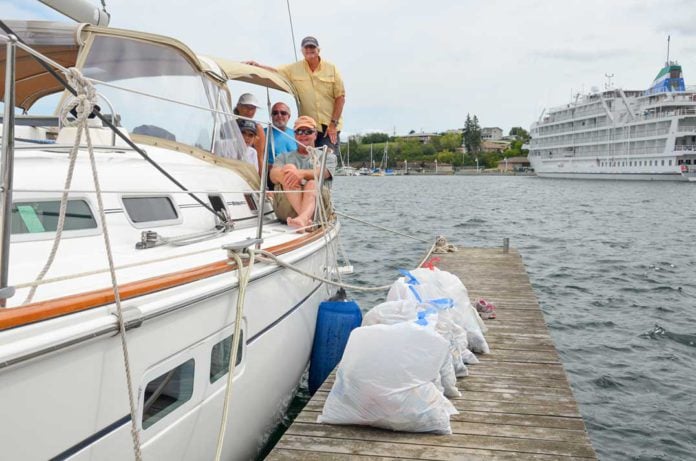 NORTH CHANNEL—Boaters across the North Channel of Lake Huron and the west end of Georgian Bay took to their dinghies, kayaks, paddleboards and other assorted small vessels on Saturday, August 20 to scour the shorelines for plastic debris, while a mini-trawl in the Port of Little Current focused on the search for microbeads.

“We had a very successful participation in the eXXpedition Great Lakes initiative here in the North Channel of Lake Huron and the west end of Georgian Bay on Saturday,” said organizer Tom Boyce of the sailboat Traveller. “Sincere thanks to everyone who participated.”

Mr. Boyce, his wife Brenda, and Lilli the plastic sniffing dog have been coming to the North Channel for 30 years (well Lilli for somewhat less, but still all her life) and they are effusive in their praise for the reverence Canadians hold for the waters of the Great Lakes. It is a passion they share.

“Just look at this,” said Ms. Boyce as she produces a photo she had captured a couple of days before on her smartphone. The photo, taken at night, shows a stunning view of the Little Current waterfront, lights glimmering off the waters of the North Channel. “We have sailed all over the world. This looks like it could have been taken in the Greek Islands.” It does.

It is the protection of the pristine waters of the North Channel and Georgian Bay that led the Boyces to approach Roy Eaton to enlist his Cruisers’ Net broadcasts in helping organize a local response to the eXXpedition Great Lakes 2016 mission.

The eXXpedition Great Lakes 2016 mission seeks to “make the unseen seen by leading the world’s largest simultaneous water sampling project for microplastics,” according to the group’s website.

Enlisting citizen scientists from around each of the Great Lakes and the St. Lawrence Seaway, eXXpedition Great Lakes 2016 was a community-led initiative open to everyone in the Great Lakes region of America, male and female, adult and child, solo or in groups, who all took time out on a summer Saturday to “stand up for the health of your lakes.”

“We conducted a major shoreline sweep east and west of the town of Little Current (on Manitoulin Island) including areas around Spider Bay and Low Island, which resulted in seven large garbage bags filled with a variety of plastics and other debris being collected,” reported Mr. Boyce. “Another sweep along the north shore of Goat Island, across the channel from Little Current, produced another two large garbage bags full of debris, in addition to (believe it or not) two five dollar Canadian bills.”

Interestingly, the two bills were held down by stones according to the finder.

There were 76 boats at various anchorages throughout the North Channel, from the Whalesback Channel east to the Bad River in Georgian Bay, who were asked through the Cruisers’ Net to sweep their areas to collect any plastic debris. “Of those, 12 boats reported findings in the areas of Heywood Island, Mosquito Island, Amendroz Island, the Benjamins, Gibson Island, Snug Harbor, Sturgeon Bay and Gallant Island near John Island,” reported Mr. Boyce. “In total these anchorages produced another four large bags of plastics and other debris.”

On a very bright note, Mr. Boyce noted that “many other anchorages were reported debris-free.”

After the sweeps, at 1400 hours (that’s 2 pm in landlubber terms), Mr. Boyce and some fellow volunteers deployed a mini-trawl (based on a ‘Babylegs’ design he found on the Internet) to sample the waters of the North Channel on the Little Current waterfront for signs of microbeads (tiny bits of plastic added to many hygiene and household products for their scrubbing potential).

The Babylegs mini-trawl was constructed from a baby’s nylon tights, a plastic pop bottle and, according to Ms. Boyce “many, many trips to the hardware store to make sure it would stay attached.” The final successful adhesive measure have done Red Green proud—that good old Canadian standby, duct tape.

“The trawl will be given to the organizers of eXXpedition GL 2016 for lab evaluation and a follow up report,” said Mr. Boyce. He adds that it is his fervent hope that the search for microbeads in North Channel waters will prove fruitless.

Mr. Boyce, who holds a master’s certification, became involved in the eXXpedition efforts when a friend mentioned to him that there was a need for a ship’s master to shuttle the Sea Dragon, the ocean going vessel the group uses to survey the oceans of the world with a mantra trawl (a much larger version of the mini-trawl Mr. Boyce constructed, but still only about five feet wide) from the Baltic to the English coast.

Like most people, Mr. Boyce was generally oblivious to the threat that plastics and microbeads in particular pose to the world’s wild fish stocks. His sojourn aboard the Sea Dragon was a definite, and alarming, eye-opener.

“These plastics don’t biodegrade, they photo-degrade,” he noted of the bulk of the plastics ending up in the ocean (and the Great Lakes). Gradually breaking up into smaller and smaller pieces, the tiny bits of plastic find their way into the food chain, being mistaken by smaller fish as food.

“Larger fish eat the little fish, and bigger fish eat those fish, eventually, those fish find their way onto our dinner tables,” he said. “They end up in the human body.”

The biggest hope that Mr. Boyce and the researchers have for the plastics survey is to raise awareness of the issue, to help educate consumers and, in turn, bring pressure on manufacturers to switch to biodegradable plastics and stop using microbeads in their products (microbeads are now listed as a toxic substance in Canada).

The results of the trawls and mini-trawls such as that used by Mr. Boyce and his compatriots will be made public in a report following their analysis.

“We have to give a special thank you to Roy Eaton for his help in promoting this event over his Cruisers Net,” said Mr. Boyce, who also thanked The Expositor for taking an interest in the story. “Finally, another big thank you to the following boats for their special contributions: Persistence, Windfall, Annie’s Song, Slo Motion, Sleek, Into the Mystic, Wind Swept, Georgian Mist, North Star and Giverny.”

Mr. Boyce and many of his fellow boaters are American citizens, making their way up to the waters of the North Channel and Georgian Bay each summer to enjoy the beautiful and pristine waters, and they have a strong interest in helping to protect what they see as a very special set of waters.

“You have a real gem here,” said Mr. Boyce, who offered up that generally, to his mind’s eye, Canadians are more in tune with the need to protect the environment than many of his fellow countrymen back home, adding this is a real treasure, “you never want to lose it.”