EVANSVILLE—While Burpee-Mills is encouraging its local taxpayers to join them in petitioning the provincial and federal government to terminate its practice of designating conservation lands as tax exempt, a representative of the Escarpment Biosphere Conservancy (EBC) says community conservation lands provide benefits to the local community, region, province and the country.

“Our municipal council feels that conservation lands in the municipality have almost become a burden to our taxpayers,” stated Ken Noland, reeve of Burpee-Mills, in an interview with the Recorder on Monday. “We keep losing property and assessment to conservation groups with tax exempt status and we have not lost any lands yet—that would be part of the 1990 First Nations land claim.”

In the petition from council to municipal landowners-residents of the municipality of Burpee-Mills to MPP Michael Mantha and MP Carol Hughes, it is stated, “we, the undersigned, are concerned that an increasing amount of conservancy property in our municipality is being designated “tax exempt.” Recently 1,205 acres was donated to the Nature Conservancy of Canada which has applied for “tax exemption” status. Seven hundred and twenty-five acres of land, previously acquired by the Nature Conservancy of Canada, Escarpment Biosphere and Ministry of Natural Resources (MNR), has been designated “tax exempt.”

In an information package provided to local taxpayers, it is pointed out, “On March 12, 2012, 1,205 acres of land near Lorne Lake in Burpee township was donated to the Nature Conservancy. This, as well as other generous land donations, will impact negatively on you, the taxpayers of Burpee Mills. When the Nature Conservancy applies for and receives tax exemption, our municipality will lose tax assessments ($317,000). You will be responsible for covering the lost tax revenue.”

“Even last year, when your council declared a zero increase in the municipal budget, your property tax increased to cover the cost of the lost assessment on these tax exempt conservation lands,” council’s letter reads. The 10 conservation areas, “designated tax exempt equal a loss of $271,481 tax assessment to our municipality. Despite the provincial government’s generosity to the wealthy Escarpment Biosphere, municipal service requirements do not decrease. Our municipal budget must continue to provide for road maintenance, police services, ambulance services, health services, social services and housing, as well as all other municipal requirements. You will be responsible for covering the shortfall resulting from declaration of tax exmpt Escarpment Biosphere and MNR lands. Also, with our municipal land assessment decrease of $588,481, other Manitoulin municipalities are impacted, because shared services are proportioned on the basis of each municipality’s assessment figures.”

It is pointed out in the Burpee-Mills notice, “the 2,124-acre tract of Misery Bay Provincial Park has not been declared tax exempt.” However several properties “have been removed from our municipal tax assessment, and are now classified as commercial payment in lieu, for land owned by the Province of Ontario Ministry of Energy and Infrastructure. They include a total of five properties.”

“Thus far the provincial government has provided an annual grant of approximately $26,000 to our municipality as commercial payment in lieu of taxes,” the notice reads. “This grant will continue to be provided under the Provincial Parks Municipal Tax Assistance Act, chapter four. If you agree that the provincial government should terminate its practice of designating conservation lands “tax exempt,” residents are encouraged to get a copy of the petition and mail them to MPP Michael Mantha and MP Carol Hughes. “If this tax exemption for the Nature Conservancy, Escarpment Biosphere and MNR is continued, your tax burden will eventually become overwhelming.”

“It not only costs the taxpayers when we lose tax assessment, but we still have to still spend funds on things like maintaining roads, which is taxpayers’ money,” said Mr. Noland. “And when we lose land or assessment it hurts everyone not just Burpee-Mills. I mean the Sudbury and District Health Unit budget is still the same as is DSB (District Services Board) budget remains the same, and what is lost through assessments, everyone in our areas pays a larger share of these costs.”

“We’re asking for there to be a cap or for the province to terminate its practice of designating conservation lands tax exempt,” said Mr. Noland. “With our mill rate right now every $100,000 in assessment is $1,200 in taxes, so every time we lose $100,000 worth of land-assessment we are losing $1,200 out of pocket. It may hurt us harder at the time, but all municipalities on Manitoulin are affected.”

In response to the petition, Bob Barnett, of the EBC, stated in a letter to council, Ms. Hughes and Mr. Mantha, “I have just received a copy of a blank petition regarding property tax exemption for conservation lands. Lands owned by the EBC are exempt under the Conservation Land Tax Incentive program applying to community conservation lands, but not lands owned by the (MNR). Community Conservation Lands provide benefit to the local community, the region, the province and the country. I hope that I may add some facts on these benefits to the summary sent out to residents.”

Mr. Barnett explained, “the cost of a nature reserve to the community is pretty minimal. Our reserves seldom generate the need for municipal services like fire, police, sewage treatment, garbage disposal or snow clearing as would a typical landowner.”

Nature reserves bring services to the community, wrote Mr. Barnett. “Elinor Ostrom was a long-time summer resident of Providence Bay and won a Nobel Prize for her work on the benefits and resources we all share as a community called the commons. Having natural areas protected as a commons brings a broad range of ecological and social benefits ranging from recreation, health, education, tourism, aesthetic benefits, air and water cleaning, flood control, carbon sequestrian and the protection of our biodiversity. Manitoulin has more rare species than other areas of the province.”

“Many studies have indicated that natural areas generate a great deal of benefit not only for local residents but also for the rest of the country,” wrote Mr. Barnett. “As an example, the benefit generated by a forested area averages about $2,000 per ace per year. This is far more than the average assessed value on our 237 acres in Burpee Mills which average $930 per acre. Municipal taxes on a single acre would be about $8.92 per acre. The public is getting an annual benefit 200 times higher than the taxes lost by the municipality.”

The Conservancy gets no financial benefit, but the public, and indirectly the municipality, the region, and the province, benefit through increased income from tourism and reduced costs for municipal services, explained Mr. Barnett.

On nature reserves building the tax base, Mr. Barnett wrote, “There is little doubt that many people visit Misery Bay Provincial Park. Our Conservancy has added three parcels with a total 100 acres to that protected area. Many of those visitors bought gas, food, crafts, and other supplies bringing dollars to the Burpee Mills community. Those tourism operators have increased incomes and pay property taxes on facilities built to host those visitors.”

As for nature reserves and provincial compensation, Mr. Barnett wrote, “I note that Conservation Land Assessment represented 1.1 percent of your (Burpee Mills) total municipal assessment, $53,065,300. This represents a smaller share than many other municipalities across the province. Burpee Mills received partnership funding (OMPF) from the province to compensate for this loss of property tax revenue and to help you provide services with your relatively low assessment per population. Further, the province uploaded a further $50,400 from the municipality by taking over the cost of more services. In total, Burpee Mills benefited by $309,600. The likely loss of $5,560 in taxes is relatively small in comparison.” 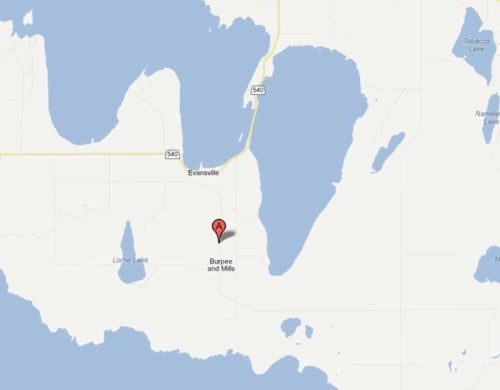