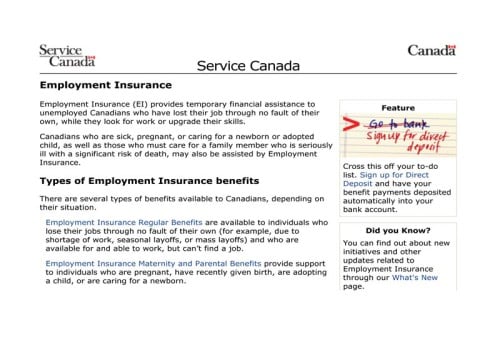 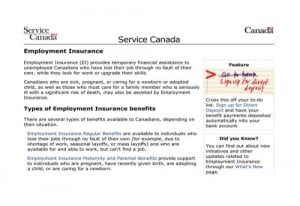 OTTAWA—There are big changes in the way Employment Insurance (EI) operates coming early next year and if you live and work in a region heavily dominated by seasonal industries, like most of the North, the news is not looking good.

“We are extremely concerned about these changes and the way the government appears to be going about them,” said Algoma-Manitoulin-Kapuskasing MP Carol Hughes. “The minister appears to be making up the story as she goes along. Every day it is a different story. This government is mismanaging the EI file.”

Ms. Hughes said that the lack of consultation, public or otherwise, and the lack of any hint during the recent election that the government was planning changes to the EI system was unconscionable. “If people had know what they had planned, perhaps different decisions might have been made (at the ballot box),” she said.

In addition to changes to how EI benefits are allocated, Ms. Hughes pointed out that the government plans to close down the EI tribunal system and centralize the regionalized appeal process with a new group of government appointees. “We have seen what this government does for its failed candidates when it comes to the Senate and other appointments,” she said. “They came to government promising to do things differently.”

It is likely to be some time before the public knows any of the details on what exactly those changes are going to be. The Harper government wants to pass the enabling legislation tucked within a massive omnibus budget bill before fleshing out the fiddly bits.

What has so far been revealed is that after a short period of time, based on how often an unemployed worker has had to access the employment insurance system, workers will be expected to accept what the government defines as ‘suitable employment’ and engage in a ‘reasonable job search’ or risk being cut off from benefits.

The federal government’s definition for suitable employment will apparently be based on six criteria: personal circumstances, working conditions, hours of work, commuting time, type of work and hourly wage. It is not clear whether those conditions will be modified for regional circumstances, such as the lack of available public transportation.

As to be expected, the changes were quickly panned by opposition parties and labour groups as an attack against seasonal industries that will also undercut wages and working conditions.

The official opposition NDP position stated that the EI system belongs to Canadians and not the Conservative Party of Canada, going on to assert that that the federal government’s changes will strip hundreds of thousands of Canadians of their right to access a program they pay into most of their lives.

The EI system is paid for through contributions of employers and employees through payroll deductions. Until the 2008 economic downturn, the EI system regularly contributed billions of dollars to federal government coffers.

NDP finance critic Peggy Nash went further to claim during a recent media scrum that the government is “scapegoating Canadians” by suggesting those receiving EI benefits are not looking hard enough for work. “What I hear from this government is a message to demonize people who, through no fault of their own, are unemployed.”

The government took a different position.

“These changes are not about forcing people to accept work outside their own area, nor about taking jobs for which they are not suited,” Human Resources Minister Diane Finley told national media reporters in Ottawa in announcing the changes. “These improvements will introduce new, needed common-sense efforts to help Canadians get back to work faster.”

The changes only come into play for those receiving regular or fishing benefits—sickness, compassionate, maternity and parental benefits will remain largely intact.

The Harper government claims that the changes will result in less than one percent of workers being cut off from their benefits. Currently, independent estimates show that only 40 percent of unemployed Canadian workers are eligible for EI after being laid off under the current regimen, usually due to having an insufficient number of hours, while the government claims that some 84 percent of laid off employees are eligible for benefits.

According to Statistics Canada, there are roughly 549,000 unemployed Canadians currently receiving EI benefits in the country, as compared to approximately 15 million Canadians who collect a paycheque from an employer.

Provincial premiers, particularly in the Atlantic region, note that the changes fall disproportionately on rural, Northern and Aboriginal communities, whose dependence on seasonal employment far outstrips those in urban areas or the west. Premier Robert Ghiz of Prince Edward Island expressed his concerns about the program, saying that, “one size does not fit all. That what works in downtown Toronto and downtown Calgary does not necessarily work in Prince Edward Island.”

“This is very disadvantageous for us here in the North,” said Anishinaabek Nation Deputy Grand Chief Glen Hare. “Our jobs, most of them, are seasonal. They always have been. There is very little year round work in our communities. I wish there was. The days of the big boom, with lots of jobs cutting wood, are over. These days, it just isn’t possible. No way.’

Chief Hare noted that at the same time the federal government is moving to reduce employment benefits for those dependent on seasonal and cyclical work, they are also taking steps to reduce existing wages by forcing people to take jobs outside their field for less pay.

“I just came from addressing graduating students at Sault College,” said Chief Hare. “These young people have gone to school to try and make a better life for themselves, and here you have the Minister of Finance saying, ‘go out and get a job driving cab.’ For these big shots in government with their great salaries and big pensions, they don’t have to worry about it. They have no idea what it is like. It is very disturbing to me to hear people from Ottawa attacking the future of our children like that. It’s not right.”

Chief Hare had a singular piece of advice for young people in his communities about the current government. “When the next election comes around, take a look at what people have done, and get out there and vote,” he said. “If everyone went out and voted, you would see a lot of these politicians sitting up and taking notice.”

Social service agencies are taking stock of the announced changes, but without many specific details it is difficult for them to assess the potential impact.

“Any changes to the Employment Insurance system would definitely have an impact,” said Donna Moroso, director of integrated social services at the Manitoulin-Sudbury District Services Board. “Technically, we (Ontario Works) don’t see them until their EI is exhausted and they have used up their other assets. But when someone has lost their job and exhausted their EI, Ontario Works picks up the pieces. A lot of people don’t qualify, Ontario Works is a last resort.”

There is little question that when someone loses their job and available work opportunities in the community are lacking, as is too often the case in small one-industry towns, the last resort eventually comes calling. Ontario Works is a provincial responsibility, with administration costs often shouldered by the municipalities through District Services Boards—the burden of maintaining the safety net of last resort will fall on already tapped provincial resources and, to some extent, property taxpayers.

The Liberals are hammering the government over the lack of information being provided by the governing Conservatives on the new measures.

“Changes of this magnitude should be enshrined in legislation, not made hastily on the back of a napkin,” said Liberal Human Resources and Skills Development and Labour critic Rodger Cuzner. “We are calling on the Conservative government to strip the EI provisions from the omnibus budget bill and put them in a separate bill so that MPs and Senators can give these measures the study that is needed.”

The Liberals have teamed up with Green Party leader and sole party MP Elizabeth May to stall the omnibus legislation in an attempt to force the majority government to break up the 400-page plus bill into parts that can be debated in detail.

In determining the type of work and wages considered suitable, EI claimants will be placed in one of three categories.

The first would be long-tenured workers (25 percent of claimants), people who have paid into the EI system for the past seven of 10 years and have received 35 or fewer weeks of EI regular/fishing benefits over the past five years. They would be provided with more time to search for a job within their usual occupation and normal salary ranges, starting at 90 percent of their previous hourly wage and, after 18 weeks on EI benefits, would be required to expand their search to “similar” jobs and accept wages at 80 percent of their previous wage.

The second category would be “frequent claimants” (17 percent of claimants). Those are EI claimants who had three or more regular and/or fishing claims and received more than 60 weeks of benefits in the past five years. They would be required to expand their search to “similar” jobs at the onset of their claim and accept wages starting at 80 percent of their previous hourly wage. After receiving benefits for seven weeks, they would be required to accept any work they are qualified to perform and accept wages at 70 percent of their previous hourly wage.

Finally there would be the occasional claimants (58 percent of claimants). This group would include all other claimants, who generally have limited experience of being unemployed and searching for work. Occasional claimants would be allowed to limit their job search to their usual occupation and normal wages (at least 90 percent of their previous hourly wage) but, after receiving benefits for seven weeks, would have to expand their search to similar jobs and accept 80 percent of usual wage. After 18 weeks, they would have to search for any position they’re qualified for and accept 70 percent of their previous salary.

The government has set aside some $21 million to implement the changes, most of which is slated for a new job search software which will email recipients regularly with available jobs listed both in the Canada Job Bank and private agencies. Some of the funds will be used to help ensure that EI recipients are ‘compliant’ with the new requirements.