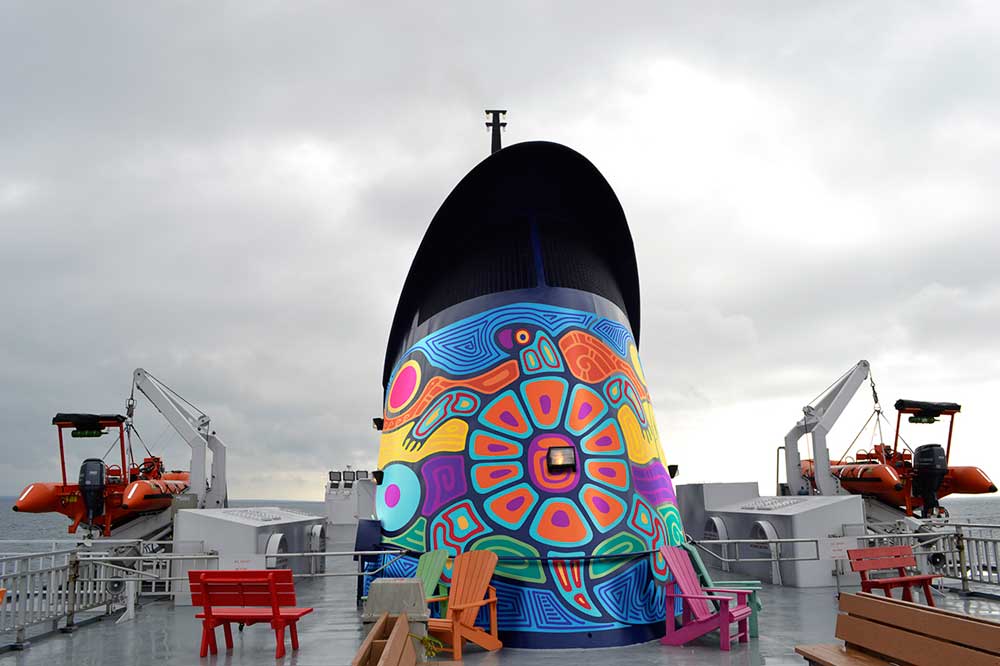 OWEN SOUND— Despite a sailing season truncated three days due to unseasonably heavy late ice cover this past spring, there is good news contained in the preliminary ridership statistics provided by the Owen Sound Transportation Company, operators of the MS Chi-Cheemaun ferry following the final sailing of the season on Sunday, October 18. The number of vehicles and cyclists travelling the ferry, which provides Manitoulin Island’s southern link to the mainland between South Baymouth and Tobermory, show a marked increase this year over 2014.

“There has been a significant increase in ridership,” said OSTC CEO Susan Schrempf, who noted that preliminary statistics indicate vehicle traffic rose 8.68 percent this season, with 73,578 vehicles making the crossing in 167 sailing days in 2015 (that is despite the three days lost to ice in spring), compared to 67,699 vehicles making the crossing during 170 sailing days in 2014. Passengers were also up 10.81 percent over 2014, with 185,712 making the passage compared to 167,593 in 2014.

Although the numbers of racked bicycles (those strapped to vehicles) were not yet available, the number of cyclists travelling the ferry were also up significantly, with 987 cyclists in 2015 compared to 862 cyclists making the crossing last year.

The Fifth Annual Passage Ride collaboration with the OSTC and the ferry, wherein cyclists receive free travel from Tobermory to South Baymouth to take part in the event, has proven to be popular and successful and MICA is hoping to continue that collaboration again with their 2016 Passage Ride. This year’s Passage Ride will be focussing on the new loops that highlight Highway 551, a marvelous scenic offering that will skirt the shores of two lakes.

“We are already in communication with the OSTC and we are hoping their response will be positive,” said Ms. Mielonen. Last year’s Passage Ride focused on the Georgian Bay Cycling Route, she noted, and planning for next year’s event, scheduled for June 4 to 5, 2016, is already well advanced.

Ms. Schrempf noted that the new Chi-Cheemaun ferry marketing program has been getting substantial and positive feedback this year, bringing results well ahead of the anticipated timeline.

“We did a significant invasion of the TTC (Toronto Transit Commission) system this year,” she said. “This is part of the reason that ridership is up.”

As part of the marketing efforts taking place the OSTC has instituted a brand new website and is currently bringing a new reservation and ticketing system online at the company.

Among the organizations with which the OSTC is exploring partnership arrangements is the Great Spirit Circle Trail (GSCT). “They have put together some wonderful packages,” noted Ms. Schrempf. “We are really looking forward to working closely with the GSCT going forward.”

First Nations cultural experiences were showcased on the ferry this year, with drum workshops and teachings provided by Falcon Migwans onboard proving to be very popular. “We have had lots of positive feedback on those presentations,” noted Ms. Schrempf. “He (Mr. Migwans) was a delight to work with and has a great gift for connecting with people. He seemed to be having a good time with it too.”

The OSTC is also working with Canadian authors, hoping to showcase them and their works on the passage with readings and other events.

The marketing efforts have proven to be an exciting time for the OSTC and its small staff, but challenging. “Our new marketing manager came on in May at the beginning of the season, so she was really thrown into the thick of things right away,” noted Ms. Schrempf.

With the marketing efforts showing promise so early in the process, the OSTC is looking forward to even better results next year. “As long as the ice cover and water levels cooperate,” said Ms. Schrempf, adding that with a banner El Nino event forecast for the season, the prognosis on that front also seems positive. 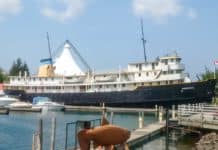 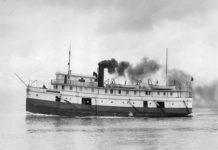