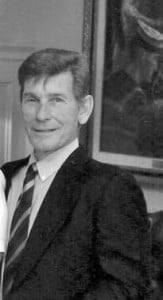 In loving memory of Bud, 70 years. Bud passed away peacefully at home on Sunday, June 10, 2012 with his loving family by his side. He had a short, stubborn fight with cancer. Beloved husband of Jane (Row) and loving father of Pam Rohn, Little Current, Colleen Mailloux (Jeremy) Manitowaning and predeceased by son Shawn (1987). He is survived by four grandchildren, Lauren, Joel and Dexter Mailloux and Jayden Hembruff-Rohn and his faithful pal, Bullet. They were the light of his life. Also survived by sisters Betty Cowie (Frank) and Sandra May of Ottawa; Beverly Sabourin (Kemptville) and Barbara Silvers (Maurice) of Marathon; mother-in-law, Shirley Row, Smiths Falls; brother-in-law of Richard Row (Rita) of Perth; and sisters-in-law Judy Hum (Roger) of Brockville; Maureen Beatty (Colin) of Burlington; and Leslie Smith (John) of Stittsville. Bud worked for Inco for 30 years and spent 14 years of that living in Thunder Bay and working at Inco’s Shebandowan Mine, which he considered “his” mine. He retired in 1994 to Manitowaning and became involved in his community and served 10 years as a councillor and was elected reeve of Assiginack Township in November 2010. He took great pride in serving the people of the community and never backed down from a challenge. Bud loved his boat, “Who Cares” and spent many hours cruising the waters of Georgian Bay with family and friends. He always said, “If you die on Manitoulin, you don’t go anywhere, because you’re already in heaven. At Bud’s request, there will be no service or visitation. There will be a “Celebration” at a later date to be announced. In lieu of flowers, donations can be made to the Assiginack Library Expansion Fund. As Bud would say, “TASOMA”. Arrangements entrusted with Island Funeral Home, Little Current, www.islandfuneralhome.