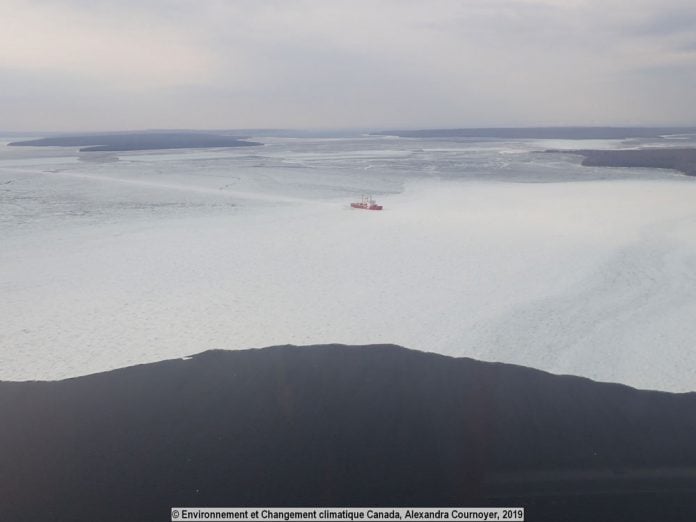 The Canadian Coast Guard Ship Pierre Radisson, currently icebreaking on Georgian Bay, will sail through the Mississagi Strait tomorrow (Saturday, April 20) to the north shore of Lake Huron to conduct harbour breakouts at Bruce Mines and Smelter Bay (Thessalon). This is in advance of the anticipated arrival of a commercial ship next week.

The dates are subject to change depending on operational requirements or weather conditions. All ice surface users should plan their ice activities carefully, use caution on the ice and avoid the shipping lanes and icebreaking operations. The ice can be expected to be deteriorating naturally due to spring conditions and the effects of the sun. Extreme caution must be exercised should anyone venture out onto the ice.

On the Great Lakes, the Canadian Coast Guard has assisted 235 vessels so far this icebreaking season.

Photo caption: April 18 2019 – CCGS Pierre Radisson breaks through the ice to reach Midland Harbour on southern Georgian Bay. This medium icebreaker is home ported in Quebec City. It spends its winters icebreaking in central Canada and its summers in the Arctic, escorting ships in the annual resupply of northern communities. There are 38 officers and crew onboard.