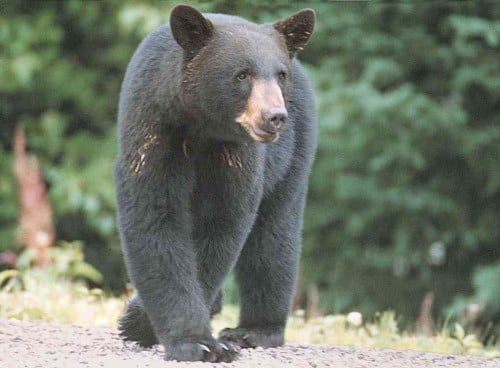 SPRING BAY—Having been harassed by one bear two years ago was enough for a Spring Bay couple, but they were recently paid a visit by four more bears.

“We had four bears on our front lawn this morning,” Vincente Belenson told the Recorder last Friday (August 24) afternoon. “It was amazing—there was the mother bear and three cubs.”

Mr. Belenson had written in an email to the Recorder earlier in the day, “ever since the story of our escapade with a bear appeared in the Recorder two years ago, people have been asking me if I’ve seen any more bears. Well, this morning I saw four of them right outside my door, three cubs and the mother.”

“I had just sat down with a cup of tea, admiring the view outside our large window when I saw our cat running across the grass,” he explained. “She disappeared behind the house and then I saw what at first I thought was a dark brown dog, but it was actually a young bear. Then two more appeared and finally the mother bear, who stood patiently by while the cubs cavorted about. Two of them even shinnied up the oak tree about five metres away from the house. If I ever had any doubts about how fast a bear could climb a tree, I don’t any more!”

“After a while the mother turned and began to amble down the driveway and the three cubs followed,” continued Mr. Belenson. “I just had time to coax the cat back into the house when the bears reappeared. Eventually they shuffled off into the woods down the very path I use to go to the lake. I will certainly think twice or thrice before hiking alone down to the lake again.”

“And the MNR wants to cease trapping bears? Should I call the OPP?” Mr. Belenson questioned in his email.

“I called the (MNR) Bearwise hotline and reported the incident about what to do when encountering a bear,” he continued. “We have an apple tree that is close to the road and every two years we get a good crop of apples, but a week ago all of the apples were gone, probably because of these bears. I don’t even see any on the ground. Anyway, the person I talked to from the Bearwise program said bears love apples and that there is not a lot of food in the woods right now, so they are looking for other sources to eat. I’m certainly weary of going outside and going down the path I usually take walking in the woods.” 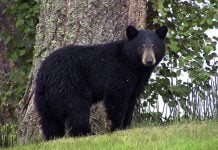 Bears looking for alternative food due to berry shortage

Ontario, OPP remind people what to do as bears come out of hibernation

Thanks to Expositor staff for Sheg Bears coverage