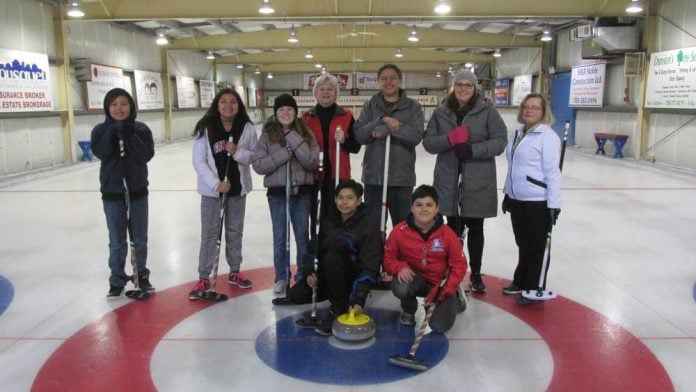 Spring may be just around the corner, but we’ve got a few more curling events to report on before we get there! This past weekend was the 30th Annual Curffle Tournament in Gore Bay. The event is a west end staple and enjoyed by so many curlers and curling fans from all across the Island.

Here is a rundown of the winners and runner-ups from the Gore Bay’s Curffle Tournament:

Congratulations to Jennifer Jones’ Team Canada rink who won Gold at the Women’s World Curling Championship in North Bay, beating Olympic Champion Team Sweden on Sunday. The game ended in dramatic fashion as Sweden tied the game in the 10th end to force an extra end. Sweden’s skip missed a pick with her last shot to seal the victory for Team Canada.  Jones’ rink ran the table at 12-0 in the round robin, beat the Americans in the semi-final and finally won Gold on Sunday.

There are two more Island curling events coming up to end another year of great curling on Manitoulin. The Assiginack Curling Club is hosting their annual closing bonspiel being the Leona “the Hammer” Reid Memorial Curffle tournament this Friday and Saturday, March 30 and 31. The cost is $10 per person and there is still time to sign up if you want to get in on the action! This is a great opportunity for new curlers to get out and try this variation of curling.

The final bonspiel of the year will be the Little Current Ladies from April 6-8. I’ll have the winners and runner-ups for you over the next two weeks.

The Men’s World Curling Championship starts on Saturday, March 31 and will wrap up on Sunday, April 8 in Las Vegas. Team Canada will be represented by the 2018 Brier winners, Brad Gushue’s rink from Newfoundland.

Good luck to Team Canada and enjoy the last few weeks of curling to all the fans!