﻿MANITOWANING—Anyone who has sent a child off to college (or picked them up after the school year is done) knows you can really pack a lot into a six-foot cube—but when it comes to creating art within the constraining walls of a 6’x6’x6’ cube, well, creativity knows no bounds.

This year’s Debajehmujig 13th Annual 6 Foot Festival showcased that creativity with a number of installations designed to inform and engage conversation on the theme “Community Connections.”

Debaj general manager Linda Trudeau delivered welcoming remarks before introducing board president Marjorie Trudeau who opened the event with her “universal” opening prayer the ‘Our Father.’ Ms. Trudeau was followed by a drum song from Jesse Kaboni.

“Our 6 Foot Festival was themed with community connections,” said Ms. Trudeau. “One of the opportunities offered was the collection of art that Wiikwemkoong has maintained over the years of artists from the community.”

The result was an exhibit that coincided very well with the theme of the 6-Foot Festival, she noted. “This collection is very special, as it is coming to us as a voice from the past,” said Ms. Trudeau. “We are really excited to be entrusted with this opportunity.”

In addition to the artwork from Wiikwemkoong, the family of Francis Kagige supplied works from their private collections.

Ms. Trudeau then opened the reception to comments from the audience and noted that there will be opportunities throughout the exhibit to offer thoughts.

As part of the reception, a café was opened at the Creation Centre as well. “People are asking me if we are going to have the café open all the time,” said festival organizer Ashley Manitowabi.

Accompanying the artwork on display are letters from the artists’ families and a number of family members arrived for the opening.

“I just want to say I am impressed,” said Debaj elder Jeanette Corbiere-Lavell. “It’s a good cross section of Francis Kagige’s work. It makes you want to see it out more.”

The opening reception of the 6 Foot Festival and the Ezhi-Nawendying exhibit can be viewed online at the Debajehmujig Storytellers YouTube channel.

Workshops and presentations were held throughout the 6 Foot Festival expanding on the theme.

The exhibit will run until January 27 and is well worth the visit to the K.B. Reynolds Mastin Gallery in the Debajehmujig Creation Centre. 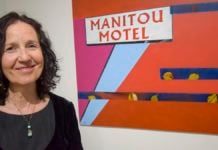 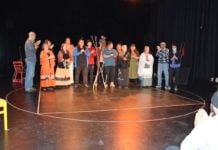 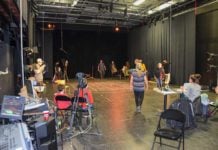