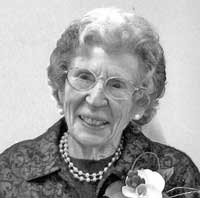 Dr. Joan Budd (nee Belcher), Guelph, passed away at home on February 14, 2015 in her 104th year. Joan was born near Roblin, Manitoba on November 9, 1911 to parents Ethel Mary and Frank Belcher. Following completion of high school, her desire to enter the Ontario Veterinary College (OVC) was thwarted by the view that “vet school was not a suitable choice for women”. She became a teacher instead and taught until the Second World War when she joined the Royal Canadian Air Force, Women’s Division and served in the protection of Canada’s west coast from 1942 to 1945. Following the war she again applied to the OVC and this time was accepted. She graduated with her Doctor of Veterinary Medicine in 1950. After completing graduate school in Wisconsin, she became the first female faculty member at OVC. Her academic and research career included work on canine distemper virus and initiating OVC programs in wildlife and fish diseases. In recognition of her achievements, Joan was awarded the OVC Distinguished Alumnus Award in 2000 and the Guelph Women of Distinction award for lifetime achievement in Science, Technology and Research in 2012. In 1957 Joan married John Budd, Resident Scientist in Charge of the South Bay Fisheries Research Station on Manitoulin Island, where they lived until his sudden death in 1962. After this she returned to a faculty position in Guelph where she remained until her retirement in 1976. Joan’s heart never left Manitoulin Island. While working, she holidayed here and on retirement she arrived with the first ferry each spring, staying through to the last each fall. The Island provided a vibrant site to pursue her lifelong love of nature and the outdoors. Sometimes jokingly referred to as “Pack a lunch Budd”, she was always agitating to explore and photograph its back roads, woods and shores. Joan lived an exceptionally long and active life, driving and living independently in Guelph and on Manitoulin Island into her 103rd year. Joan is survived by nephew Dennis Belcher of Manotick, Ontario, great-nieces Amy Hall of Vancouver B.C. and Marley Wictorin of New Denver B.C. and nephew John Haverberg of Middleton, Wisconsin. Predeceased by brother F. Hugh Belcher. Family and friends are invited to attend a memorial celebration of Joan’s life to be held April 11, 2015 at 2 pm at Cutten Fields, 190 College Ave. East, Guelph. Following cremation, Joan’s remains will be interred at Belsyde Cemetery in Fergus, Ontario.