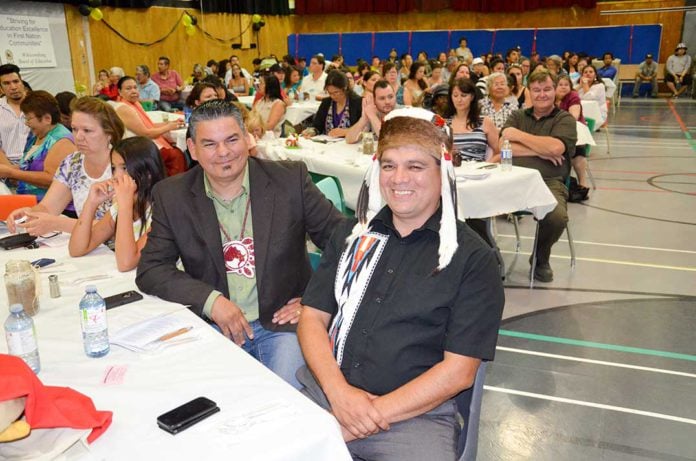 Duke Peltier said he is running for his third term as chief of Wikwemikong because he has several initiatives he wishes to see through.

“I have a number of significant activities started, especially in regards to a new relationship with the federal government that aim to address shortfalls and deficiencies due to the two percent funding cap from 1996,” said Mr. Peltier, referring to the federal government’s First Nations funding increase cap of two percent annually that was instituted 1996.  “Over the last 20 years it has resulted in a significant impact to program and service delivery in our community and we haven’t had the means to address issues like housing, programming and education. It has especially limited the scope that we have been able to support students procuring a post secondary education.”

However, with the relationship Mr. Peltier has been cultivating with the federal government, he said that Wikwemikong stands to gain investments that will have a very beneficial impact on not only the community, but for all Anishinaabek people.

“With this work, we hope to strategize in collaboration with other First Nations to look at addressing areas requiring investments such as band support funding, education and infrastructure,” explained Mr. Peltier. “We also need to ensure that communities have secure sources of water for future generations.”

Over the last four years, Mr. Peltier said that his most significant accomplishment is the Wiikwemikong G’chi Naakngewin (constitution).

Mr. Peltier said that the G’chi Naakngewin is special because it encompasses “new laws applicable to our community, developed by our community members.”

Mr. Peltier has also secured funding during his two terms to look at reducing reliance on the electrical grid and establish a micro grid in the community to help reduce electrical costs.

Through a partnership with the community pharmacy, Mr. Peltier has instigated a successful relationship to maintain the operation of the Naandwe Miikaan (addiction services) Clinic.

“This has allowed individuals in the community to get the support they need for their overall health, while staying in Wikwemikong with their families,” said Mr. Peliter.

During his four years in office, Mr. Peltier has successfully continued to protect the community’s drinking water supply by capping oil wells left by oil companies with help from a federal contribution.

“Also, there have been significant developments in the preservation and reintroduction of language through the development of a language portal by the Wikwemikong Heritage Organization,” said Mr. Peltier. “The interactive website allows users to hear and use the language on a regular basis.”

Wikwemikong has secured funding for the construction of an industrial park during Mr. Peltier’s last term as chief. “This will allow for outside private investment to create employment opportunities in the community,” he shared.

Duke Peltier was born on Manitoulin Island and raised in Wikwemikong. He left the community to procure athletic dreams, returning as an adult and running the recreation program for 10 years. He was on council for six years prior to being elected as chief four years ago.

“The community is very special,” said Mr. Peltier. “We continue to maintain our ties to the islands in Lake Huron—our ties are very strong. We continue to work with the provincial and federal governments to resolve our outstanding claims. Council feels that significant developments have been made regarding our claim and that a resolution is in the near future with a number of the islands to be returned to us soon.”