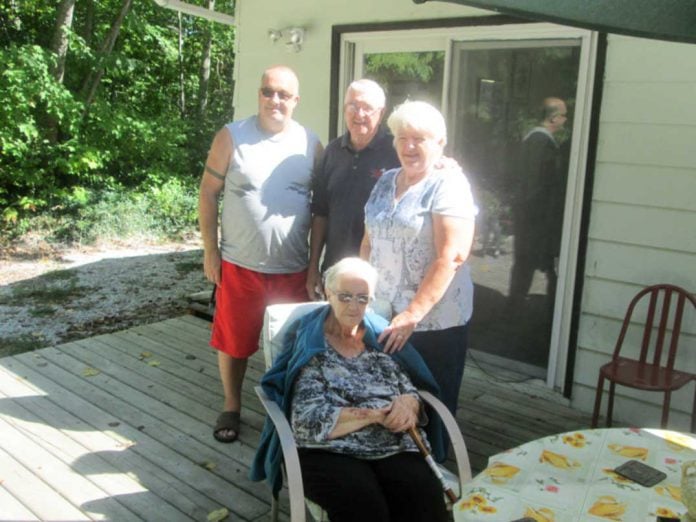 A wonderful reconnection from a wartime bond

Family and friends gathered at the home of Wayne and Vicki Collins in Sheguiandah to welcome two special guests in September. Christine (Lovelace) Fortin, mother of Norman Lovelace, Lloyd Lovelace and Vicki Collins came from North Bay to celebrate her 89th birthday, and Christine‘s nephew George Lovett came from Crawley, England to meet his Canadian family for the first time.

Until about two years ago, Christine and George had been unaware of their family connection, but thanks to Laurie Lovelace, Christine’s daughter-in-law, a connection was made through a genealogy search which resulted in the family being reconnected.

Christine was originally from Alton Hampshire, England and had met a Canadian soldier, Elmer Lovelace from Silver Water, who served in the army in England as well as serving in the Italian campaign in the Gaza Strip during the war. They married in England on December 24, 1945 and Christine came to Canada in June of 1946. They owned Ellen’s Bakery in Little Current from 1950 until Elmer’s passing in 1970.

Over the years Christine had lost touch with her English family and is certainly so pleased to have meant George after all these years. He is the oldest son of Christine’s sister Ivy.

George works as a gas fitter and boiler maker in Crawley. He was so impressed with Manitoulin Island and was amazed with our famous icon, the swing bridge. He certainly plans to return to Canada again soon.

Other guests attending were Christine’s lifetime friend Peggy Patrick of Little Current as well as other nieces and nephews of the Lovelace family that Christine had not seen for many years.