In speaking to the driver, the officer detected the odour of alcohol coming from his breath, and administered the approved screening device, which registered a reading within the “warn” range. As a result, the driver was given a 3-day licence suspension, but escaped having his vehicle towed, as he had a sober licenced driver in the passenger seat.

Driving While Under Suspension

On May 10, 2016 at 3:00 p.m., a member of the Espanola Police Service stopped a vehicle on Centre Street in Espanola, because the front seat passenger was not wearing his seat belt. While speaking to the driver of the vehicle, the officer discovered that he was a suspended driver, for demerit points.

As a result of the traffic stop, a 57-year male from Espanola was charged with driving while under suspension, and will appear in Provincial Offences Court on July 14, 2016, to answer to his charges.

Pursuant to the Ministry of Transportation’s VIP program, his vehicle was impounded for a period of 7-days.

On May 28, 2016 at 12:40 a.m., members of the Espanola Police responded to a disturbance call on Annette Street, where it was reported that two males were arguing on the street, and appeared as if they were going to fight.

Upon arrival, officers located two 18-year old Espanola residents who were yelling, screaming and swearing at each other, and did not reside on the street. In speaking to both males, officers formed the opinion that they were intoxicated, and based on their behavior, unable to care for themselves in their current condition.

Officers arrested both individuals for being intoxicated in a public place, and transported them to the Espanola Police Service, where they were lodged in the cells until sober.

Both males received tickets under the Liquor Licence Act for being intoxicated in a public place, and for being a person under 19 years consuming liquor.

On May 22, 2016 at 10:00 a.m., the Espanola Police Service attended the LCBO on Barber Street, in relation to a broken front window that was kicked or struck with an object at some point over the nighttime hours. The glass did not completely shatter, but did need to be replaced. It is unknown if this incident was an attempt to break into the LCBO, or just to cause damage to the building. 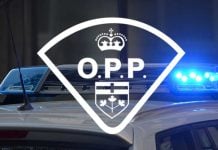 Is your child’s vaccination immunization record up-to-date with the health unit?