MANITOULIN – The Canadian government is preparing an omnibus bill focused on expanding transportation infrastructure, but a section in the bill also includes tough action to protect sensitive ecosystems. Federal officials have reportedly been working with provincial counterparts to assess several proposals to dissuade and, in some cases, ban fishing and hunting in areas of Manitoulin Island, partly due to recent reports of Manitoulin being a threatened ecoregion.

The comprehensive plan is being panned by local residents. One such proposal requires that deer hunters register their tree stands, similar to the current regulation requiring anglers to register their ice fishing huts.

“I hear from a very reliable source, a provincial government employee, that the Ontario government is looking at the idea of having all deer hunters register their tree stands and once registered, they will receive a free propane heater or a solar panel,” stated Mike Wilton, a Spring Bay resident. He pointed out the propane heaters will keep hunters warm in their tree stands. It will also provide the government knowledge as to where hunters are located.

“Of course, I’m totally against it,” stated Mr. Wilton. “I worked for the province for 35 years. They never listened to anything I said, so I doubt they will listen to anything I say against this. There is no reason for this. A tree stand is either going to be on the hunter’s property or on property that they are leasing for a hunt season. It’s a crazy idea,” said Mr. Wilton. If that isn’t enough, he says, the proposed registration fee would be $150.

Mr. Wilton said the plan did not yet have a confirmed title, but an internal planning document indicates that this is still in the proposal stage and its motivations are to preserve wildlife. The Recorder was unable to obtain a full copy of the bill but this newspaper did uncover other proposals under consideration.

In an effort to minimize biodiversity concerns and further disruption of species at risk, the plan includes consideration of all Manitoulin’s inland lakes being declared ‘no fishing’ zones for periods of six days, every 20 days. This is aimed at giving native fish populations the opportunity to focus on natural food sources and to ensure their populations are resilient enough to survive in a changing climate.

Another proposal suggests that, because parts of the North Channel are deemed eco-sensitive, ‘no motorized vessel’ zones could be put in place where only sailboats and paddle craft would be allowed. For popular spots like the Benjamin Islands or Clapperton Island, the government suggests patrols using drones with artificial intelligence systems to monitor the area and enforce fines as necessary.

If these zones overlap with the main navigation channel, it could cause headaches for the cruise industry as their ships would have to detour the long way around the South Shore of Manitoulin.

The restrictions move on-land, too. Beginning in the Township of Billings toward the western tip of Manitoulin Island, the cross-government panel has floated the idea of banning hunting of all animals through the fall.

Reports suggest that Manitoulin Island’s recent recognition as being part of a ‘highly threatened ecoregion’ prompted rare swift action from government to correct some of the concerns in this case.

“Is the government crazy?” asked Central Manitoulin Councillor Derek Stephens, an avid hunter and angler. “Here you have a government that collects our hunting and fishing licence fees and then doesn’t give us any services. This proposal is absurd.”

“It is another case of the governments looking after southern Ontario and not the North,” he added. “I’m sure members of fish and game clubs will not like this news. Members of local clubs love wild animals and fish. If these proposals are put in place they will certainly have plenty of animals to gaze at outdoors for years to come,” said Mr. Stephens. “It’s ridiculous.”

Governments in other parts of the world have experimented with other measures to preserve wildlife and natural environments in recent years, as humanity’s impact on the planet becomes ever more present.

Norway, a country well-renowned for its road safety record, began a pilot project recently to implement a lower nighttime speed limit on rural roads, owing to the high incidence rates of animal-vehicle collisions that often proved fatal to wildlife.

Meanwhile, in Spain, the government moved to restrict all-terrain vehicles from travelling off designated trails. Although it has proven difficult to proactively enforce this policy, a handful of trail monitors are active in the country and have the authority to level hefty fines if a vehicle is spotted in a restricted area.

Ontario and Canada have not indicated that they would follow the leads of any other governments, but the preliminary planning documents cite these as successful models that have emerged in other countries.

An informal poll of some residents walking along Meredith Street in Gore Bay showed very strong responses, largely out of favour with the reported planning process.

“This shows a total lack of respect for our way of life in the North,” said one resident as he entered the Valu Mart. “This crap about paying $150 to register a deer stand is just another instance of our hard-earned money going to the fat-cats in the city. Why should I have to cough up my money for an arbitrary tax?”

A woman who stopped into Robinson’s Drug Store was also surprised at the news.

“I get that conservation is important but what will this really accomplish? Manitoulin is only so big,” she said. “I don’t even hunt, myself, but I know a lot of my friends are going to roll over when they hear about this.”

The government source indicated that the task force knows this will likely be a controversial issue. Because of that, it welcomes public comments on the matter from landowners on Manitoulin Island before finalizing its proposals.

A link to the online 90-day public comment period is posted on the online version of this story at Manitoulin.com, where you will also find links to past April Fool’s Day stories from this publication. They can be found at bit.ly/3rKDZGx. 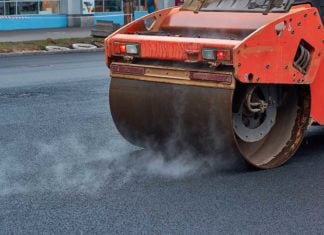 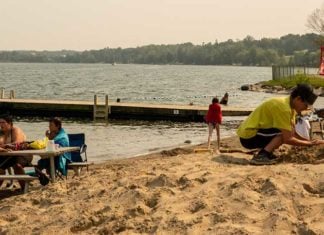