MANITOWANING—A former reeve of the municipality of Assiginack, Leslie Fields, has been selected by council to take over a vacant councillor seat.

Leslie Fields was selected among five people who had put their names forward for the vacant council member’s position. With the recent passing of Bud Rohn (June 1), Assiginack Township council had sworn in councillor Dave Ham as reeve for the rest of the council’s present term. Council also advertised for local qualified electors-residents to put forward their names as a replacement to fill the vacant council position.

“We had a total of five applicants, three of which had no previous municipal experience,” said Assiginack Clerk Alton Hobbs. As well, Ms. Fields and Hugh Moggy, who have both been on council and served as reeve of the township, had also put their names forward.

Mr. Hobbs explained, “council felt we needed someone on council who would be available for meetings in the daytime, as everyone currently on council works during the day. We were unable to send a member of council to the FONOM or AMO annual meetings, or the Ontario Goodroads Association annual meeting, although we did have a delegation with Minister Kathleen Wynne at this (latter) meeting.”

Council voted on the five candidates who had put their names forward, with Ms. Fields receiving the most number of votes. 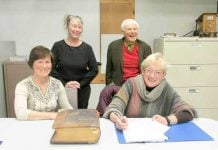