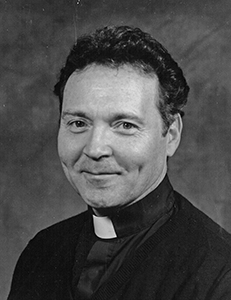 Father Michael Stogre, S.J. (Jesuit) died unexpectedly on June 24, 2015, at the Jesuit house in Vancouver, British Columbia. He was in his 71st year of life and in religious life for 52 years. Michael Joseph Stogre was born in Summerside, Prince Edward Island on June 28, 1944 and grew up in Toronto attending St. Michael’s College School, and then entered the Jesuits in 1962. He is the eldest of eight children of Winifred Quinn and Alexander Stogre. He was ordained priest on June 8, 1974. He did academic degrees in Classics, Philosophy, Theology, Medicine (M.D.) and Social Ethics (Ph.D.) He was a staff member of the Jesuit Centre for Social Faith and Justice. He lived and worked for many years (1990 – 2012) in the Espanola and Manitoulin regions and served the First Nations Peoples, particularly with developing and research in local health services. He will be missed by his family, many First Nations people and his Jesuit companions. Funeral and burial in Vancouver. Memorial Service on Thursday, July 2, 2015 at 5 pm, Anishinabe Spiritual Centre, 1091 Anderson Lake Road, Espanola, ON P5E 1T1 followed by a potluck supper. Please make donations to the Anishinabe Spiritual Centre, 1091 Anderson Lake Road, Espanola, ON P5E 1T1, Anishinabe.centre@gmail.com.