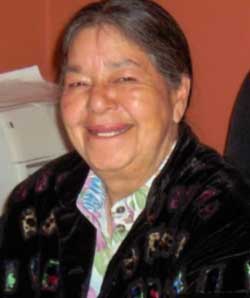 In Loving Memory of Georgina Thompson (73 years) who passed away on the morning of April 9, 2017 at her home on Sheguiandah First Nation. She is predeceased by her parents Margaret (Maggie) Baudin (aka Aguonie) and Levi Thompson (aka Abotossaway), her brothers Lawrence, John, Edward, and Ronnie and her sisters Beatrice and Florence. (Polly). She is survived by her brothers Norman (Louise, predeceased) and Francis (Celina), sisters-in-law Kari and Viola and many nephews, nieces, cousins and close ceremony family. Georgina lived a full and colourful life. She had many an adventure and had a diverse work life. She worked in British Columbia at a time when women were beginning to take on jobs that were considered non-traditional for them. Georgina drove a large truck where the tires alone were twice her size. She lived in Northern Ontario for a time for a fly-in community where she owned her own snowmachine and chainsaw as she had to provide for her transportation and heating needs in her cabin there. She worked a lot with people as a counselor. She eventually returned to Manitoulin and worked for the Sheguiandah First Nation as a Building Healthy Communities Coordinator for a few years. As is more well-known in recent years, Georgina was elected to Band Council for the Sheguiandah First Nation and in 2003 was elected as Chief and made history as the first woman elected as Chief in Sheguiandah. She remained committed to doing her best for the community to the last few months of her time here. As many of you know, Georgina practiced the Anishnaabe Culture and lived her life in that manner. Her belief was strong and she did her best to help those who came to her for assistance and teachings. Her kindness and sharing nature will be missed greatly as she was good at sharing advice that was honest and at times blunt. She also loved Bingo and had many friends that will miss her at the sessions in Birch Island. Georgina’s wake was held at her brother Norman’s residence and her burial ceremony was held on April 12, 2017 where she was laid to rest at Sheguiandah First Nation Cemetery. Record your thoughts, memories and photos at www.islandfuneralhome.ca.